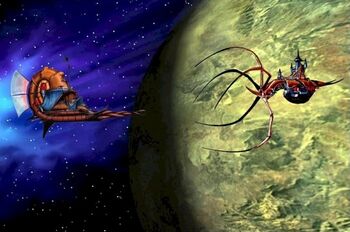 In the left corner: Mindflayers. In the right corner: Neogi and Umber Hulks. The winner gets to fight Space Elves.

An Advanced Dungeons and Dragons setting that adds up to D&D in SPACE. It has a small but loyal following. Its origins are actually a good Real Life example of making lemonade when the Pointy-Haired Boss of a gaming company hands her writers lemons; really crafty writers realize that the only difference between "They Just Didn't Care" and "Protection From Editors" is perspective. See "the secret history of Spelljammer" in Jeff Grubb's blog.

The year was 1989. It was a dark time for gaming. Although the influence of The Fundamentalists upon gaming had diminished, the forces of TSR had fallen under the control of Lorraine Williams, who was forcing talented and dedicated writers to turn out reams of crap. One piece of crap she demanded they create was a Standard Sci Fi Setting, believing she could cash in on a trend to squeeze yet more money from innocent gamers.

But the Magnificent writers hit upon a Zany Scheme; though they were denied time to playtest the game, they could cram the poor thing with as much Crazy Awesomeness as they could, as she wasn't paying attention to them. So was born Spelljammer - the most bizarre and wonderful setting ever seen in gaming.

Linking each of then-popular D&D campaign settings together by means of the old Ptolemaic view of the cosmos, the worlds of Greyhawk, Dragonlance, and the Forgotten Realms were (along with thousands of other worlds) stated to be contained in their own "crystal spheres", massive hollow balls large enough to contain a whole solar system. Some were heliocentric systems, sometimes geocentric, and some were flat worlds set upon the backs of great tortoises or other "starbeasts". Or something else entirely. The stars you see from your bedroom window are not other suns - they're actually spots of light (or glowing gems) stuck to the interior of your world's crystal sphere. Unless, of course, you're in a sphere that got giant glowing beetles slowly crawling on its inside surface. It happens, too.

Flying ships, called spelljammers (not to be confused with the Spelljammer, a legendary ship miles in length) traverse wildspace, the void within each sphere, traveling from world to world (which always seem to support life no matter their distance from the sun). The ship picks up an "air envelope" when it leaves the atmosphere, so breathing is limited by the number of crew and the size of the ship, and gravity is always directed toward the deck from both above and below. And outside the crystal spheres (accessible through natural portals or transportation magic), lies the Phlogiston (or "the Flow"), a gaseous, highly incendiary substance that's all the colors of the rainbow and lets your ship travel at warp speed as long as you're in one of its currents.

Spelljammer was utterly preposterous, didn't really care one whit about real-world astronomy or physics, and was completely aware of this. Never taking itself all that seriously, it was one of the few inherently fun games that TSR was permitted to publish in those dark times. I'm just going to list out of context some of the things that you will find in Spelljammer besides a deliciously crazy mish-mash of everything D&D had to offer: Weird Science, Space Pirates, Giant Space Hamsters, Stuffy British Elves (who are of course Better), and Gnomes who think that catapults are a good replacement for staircases. If you're into RPGs and have a strong Willing Suspension of Disbelief, check out some of the old sourcebooks for a fun time - though you'll probably have to settle for a download from DriveThruRPG.com; Williams got her revenge on her disrespectful staff by refusing to publish more than a single run of the books during her tenure at TSR.

A parody setting released by the guys who made Hackmaster, HackJammer, attempted to fit the setting to a well-tested set of rules that made it more playable, but for many it was too little too late.

A 3rd edition remake of the setting appeared in an issue of Dungeon Magazine. While thematically identical to the original Spelljammer (although with its own default campaign setting limited to a single system), it removes the Phlogiston/Crystal Spheres to replace them with the vacuum of space and star systems/galaxies, with the notable difference that suns are also portals the Elemental Plane of Fire with their own atmospheres and natural satellites (apparently magic still outright replaces physics). Additionally, a later issue of Dragon Magazine included 3rd edition versions of popular Spelljammer races. Other than that it was mostly abandoned (no proper products) and left to fans.

Spelljammer was teased for Fourth Edition: It's one of the settings listed as possible to see print, and some Spelljammer content made it into the Manual of the Planes (as a ship to sail the Astral Sea and to use to Plane Shift) and Forgotten Realms Campaign Guide (specifically referring to the crystal spheres and phlogiston), but it never materialized. A Spelljammer makes a cameo in one fifth edition adventure. It was teased further, but the developers admitted they're not going to do it. 5E's current release schedule of "as little as they can release without ownership of Forgotten Realms reverting to Ed Greenwood" makes any official release unlikely.

There's one series of novels (The Cloakmaster Cycle), one short-lived DC comic book series, and one Video Game (Spelljammer: Pirates of Realmspace) using this setting. The dedicated fan portal also tracking usenet groups and keeping mirrors of Spelljammer fan-sites that go down is spelljammer.org.

Tropes used in Spelljammer include:

The specific stories and accesories contain the following

Retrieved from "https://allthetropes.org/w/index.php?title=Spelljammer&oldid=1941674"
Categories:
Cookies help us deliver our services. By using our services, you agree to our use of cookies.