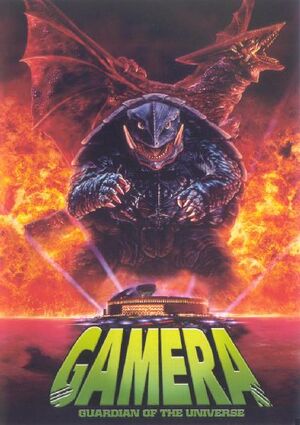 In 1965, a black-and-white movie was made in order to cash in on the success of Godzilla. That would star a legendary friend of all children known as Gamera.

Okay, Gamera can be considered Japan's most famous non-Toho monster around. He is essentially a giant turtle that spins around and saves Earth from danger on a usual basis. Unlike other monsters, he was much more benevolent to humans.

It all started with the Showa series. Aside from the first movie, the movies were in color and usually had Gamera fight other monsters. While not as popular as Godzilla, Gamera managed to become a moderate success. The series abruptly stopped in 1971 when Daiei Film, the company that was making them, filed for bankruptcy. Apart from a disappointing entry that was little more than a Clip Show, the Gamera franchise would be dormant for a couple decades.

The legacy of Gamera modestly carried on however, particularly in America. The first six films were shown constantly on local television stations in the 70s and 80s. The aforementioned eighth film Gamera: Super Monster aired on MTV at time when they rarely showed movies and was also released to local television. In the late 80s the seventh film Gamera vs. Zigra had its long overdue release along with differently edited/dubbed versions of four other Gamera films via airings on USA Network and local stations as well as video releases from new distributor Sandy Frank. Gamera was introduced to a new audience when the Sandy Frank versions aired as episodes of the series Mystery Science Theater 3000. On the show, it was derided for having too many cringe-worthy Gamera moments (One infamous scene had Gamera swing up and down a pole, Gymkata style), bad dubbing, and too much emphasis on the kids.

Then, the Heisei series came. After a long wait, it was decided that the Gamera series should be revived. A man named Shusuke Kaneko, currently famous for the Death Note movies, was chosen to direct a new Gamera trilogy. What we got was a drastic change from the previous series. The movies became much darker in tone. The monsters ended up becoming much more abstract than anything seen in a Kaiju movie. The trilogy has been praised by critics from both sides of the Pacific.

After that, the Heisei trilogy ended. It took 7 years for a new Gamera movie to come. Gamera The Brave, the franchise's lone (as of yet) contribution to the "Millennium" era of kaiju, attempted to be more like the Showa films while still keeping the Heisei trilogy's tone. It tells the story of a younger Gamera named Toto by a young boy called Toru Aizawa, who raises him from a hatchling, having to rise up to face the threat of a frilled lizard monster called Zedus.

With the exception of Gamera the Brave, all movies are available for free viewing at goohead.

Films in the Gamera Franchise include:

(These are the Japanese titles of the official films. The names vary in regional release.)

Tropes used in Gamera include:

The Showa series contains examples of:

The Heisei trilogy contains examples of:

The Millenium series contains examples of:

And, naturally, all incarnations contain:

Retrieved from "https://allthetropes.org/w/index.php?title=Gamera&oldid=1829707"
Categories:
Cookies help us deliver our services. By using our services, you agree to our use of cookies.