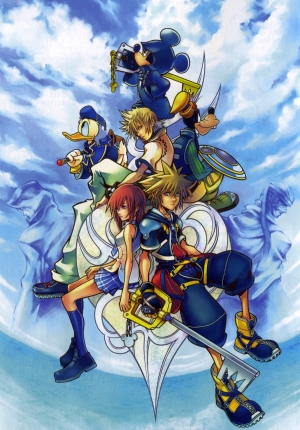 Released in early 2006, it follows Sora and his friends after the events of Kingdom Hearts Chain of Memories. They're confronted by a group of "Nobodies"—including thirteen new adversaries (or the remains of them), known as Organization XIII. As Sora unlocks new powers within himself, he also comes to realize that Ansem wasn't quite what he seemed in the first game, that Riku wasn't quite done with his quest, and that Kairi still needs him to be a hero.

The group re-visits many of the Disney worlds from the first game, often experiencing more of the familiar plotlines (and, in case of Aladdin, the straight-to-video sequel) or exploring different parts of the settings. Most of the minor gameplay complaints from the original were handily addressed, and the combat system was much improved.

Tropes used in Kingdom Hearts II include:
Retrieved from "https://allthetropes.org/w/index.php?title=Kingdom_Hearts_II&oldid=1855476"
Categories:
Cookies help us deliver our services. By using our services, you agree to our use of cookies.