Everything About Fiction You Never Wanted to Know.
(Redirected from Seiken Densetsu 3)
Jump to navigation Jump to search 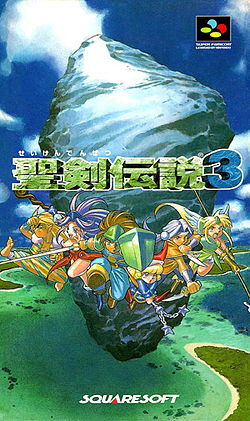 The Mana Tree is dying (again), so the Mana Goddess sends a number of its fairies to the world below and find someone worthy to restore it. All but one perish on route due to the steady loss of magic, and the Fairy that does make it settles for the first person it can find. Naturally, that happens to be the character that the player choses.

Trials of Mana, known as Seiken Densetsu 3 in Japan, is the third game in the World of Mana series, released in 1995, and is the first one that never made it Stateside in its original form. It plays very similarly to its predecessor Secret of Mana, but instead of being able to charge attacks, the meter builds with a successful hit on the enemy.

Trials of Mana also differs from other games in the series by offering a cast of six characters, of which any three can be chosen to make the party. Most notably, the lead party member determines which of the three Big Bads the heroes take on.

Before 2019, fan translations were the only way to play the game in English. In June 2017, it was included in the Japanese Seiken Densetsu Collection for the Nintendo Switch and two years later, the compilation was released in North America, where the game was given an official English localization and the title Trials of Mana. A remake is planned for release in April 24th, 2020, which includes voice acting, modern 3D graphics and a reworked combat and leveling system.

Tropes used in Trials of Mana include:
Retrieved from "https://allthetropes.org/w/index.php?title=Trials_of_Mana&oldid=1857302"
Categories:
Cookies help us deliver our services. By using our services, you agree to our use of cookies.