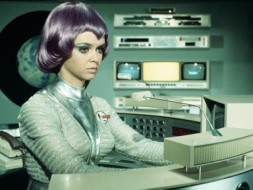 The Eighties. When men were men and women wore purple wigs.

"The Earth is faced with a powerful threat from an extra-terrestrial source. We've moved into an age where science fiction has become fact. We need to defend ourselves."

A British live-action sci-fi television series created by Gerry and Sylvia Anderson in 1970-71.

In the futuristic world of 1980 Earth is under attack by UFO's from a Dying Race (no name for the aliens is ever given) seeking to harvest people for their organs. A top-secret multinational organisation called SHADO (Supreme Headquarters Alien Defence Organisation, pronounced "Shadow"), led by the dedicated Commander Straker, is set up with impressive (though not limitless) resources, including the high-tech hardware expected from the creators of Thunderbirds. Its goal is to suppress public knowledge of the aliens while at the same time finding ways to combat them.

The series is remembered for its colourful decor, glamorous girls in Stripperiffic outfits, and dark (for its time) concept. Few of the episodes had 'happy' endings; at most SHADO would prevent some outrageous act of sabotage or destruction, innocent people were often sacrificed, and attempts to discover more about the aliens frequently came to naught. The stories included such adult themes as drug use, adultery, inter-racial relationships, and the breakdown of Straker's marriage under the strain of his job.

Unfortunately this attempt to make a Darker and Edgier version of Captain Scarlet and The Mysterons backfired, as most TV broadcasters where expecting the Andersons' usual childrens fare. This and erratic broadcasting schedules prevented UFO from gaining an audience -- a second season (set on a more advanced Moonbase in the 1990's) was scrapped, and the pre-production design and model work used for the more successful Space: 1999.

A feature film based on the series has allegedly been in the works since at least the early 2000s. The release date has been repeatedly pushed back, though, from 2012 to 2013 to 2014. SyFy's website reported a film adaptation was imminent in 2015, but nothing has been heard since then. The official web site for the movie is unfortunately of little help, as it went moribund on December 26, 2012, the date of Gerry Anderson's death, and by 2017 has disappeared entirely. One can only presume that the film has returned to the Development Hell in which it has languished for years.

No relation to Project UFO.

If you were looking for a page on the stereotypical alien spacecraft, see Flying Saucer.

Tropes used in UFO include:
Retrieved from "https://allthetropes.org/w/index.php?title=UFO&oldid=1753027"
Categories: