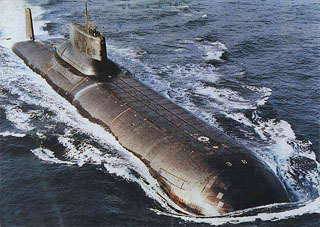 Pretty self-explanatory. What the Cool Car and Tank Goodness is to the road, the Cool Plane is to the sky, and the Cool Starship is to space, the Cool Boat is to water, whether it's a steamship, a sailing ship, or a submarine. A sufficiently large Cool Boat may also serve as headquarters for the characters. If the hero's primary place of residence is a boat that the hero owns and can take wherever he wants, that's a Houseboat Hero.

On the "boat" vs. "ship" thing: A boat is something you can lift out of the water and place on the deck of a ship. (Except submarines are boats. Tenders usually are too, no matter how big they are.) And remember, it's not an it, she's a she. (Except for if you're Russian.) Expect to get called on this by hardcore Navy types.

Under no circumstances confuse this with a Nice Boat... which is something entirely different and more disturbing. Though it may depends if you like the boat....

Examples of Cool Boat include:

Retrieved from "https://allthetropes.org/w/index.php?title=Cool_Boat&oldid=1842098"
Categories:
Cookies help us deliver our services. By using our services, you agree to our use of cookies.