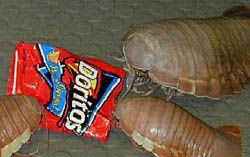 Puny humans, surrender your Doritos to the Swarm or be destroyed!

In Speculative Fiction, it is far too often the case that writers do not take into account the fact that the differences between terrestrial species and their alien counterparts would run deeper than appearance alone. Given that alien species would have evolved in environments vastly different to terrestrial ones, contending with different atmospheric conditions, different levels of background and cosmic radiation, different soil conditions, different pathogens and parasites, and so on, it is patently unlikely that any aspect of their biology would be directly compatible with their terrestrial counterparts. Aliens in speculative fiction are usually depicted less as properly alien creatures and more like humans from another country, and alien animals are merely exotic species from a different climate.

This, then, means that you will often find one or more of the following in speculative fiction:

Similarly, some people claim that most life-forms in the universe would be fundamentally compatible with each other because they would be formed from the same basic chemicals. For example, despite all earthly life stemming from a common ancestor, a significant amount of the plant life on earth is unsuitable to downright deadly for human consumption, while animals that do eat plants generally are able to only due to a bacterial symbiotic relationship with the only organisms who can. Considering that life on other planets wouldn't even necessarily be carbon-based, this is a very naive position. Also, arsenic is one of those "same basic chemicals" as well.

This is one of the problems to watch out for in How to Invade An Alien Planet.

Examples of No Biochemical Barriers include:

All Atmospheres Are Equal

Retrieved from "https://allthetropes.org/w/index.php?title=No_Biochemical_Barriers&oldid=1950625"
Categories:
Cookies help us deliver our services. By using our services, you agree to our use of cookies.