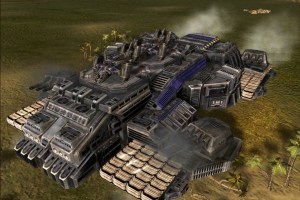 In the military, innovation has driven military conquest as someone found new ways to do something that was better than what came before. However, in Speculative Fiction, it seems that a lot of people have decided combining previous concepts into one über-machine is easier than coming up with something original.

Enter the Military Mashup Machine. In reality, some of these would be far more expensive than practical, with other existing military technologies being much easier to get the same results from, but if it looks cool, why not present it as worthwhile?

While generally members of Speculative Fiction or Science Fiction, these can also show up in Steampunk as well. See Airborne Aircraft Carrier and The Battlestar for specific Sub Tropes.

Examples of Military Mashup Machine include:

The Land Battleship is a landgoing vehicle bristling with heavy artillery, generally the equivalent of a naval vessel's guns only on land, or rather, a really big tank. Often used in deserts.

Aren't just tanks that can travel on water, but often are entirely submersible until they surface on the beach.

These can fight equally well in the air or in the water.

The is exactly what it sounds like. A factory capable of pumping out mass-produced (often robotic drone) war machines, combat-ready right off the assembly line. This is usually its primary purpose, though it may have other weapons.

Starships in most Space Opera series, including Star Wars, Babylon 5, and both versions of Battlestar Galactica, tend to be a space-borne hybrid of a modern naval battleship and a carrier, possessing heavy armor and lots of large guns as well as a sizable fighter compliment. Operating in space alleviates a lot of the conflicts in design that prohibit this combination in real life (need for a runway and elevators, having a large portion of the vessel's surface be unavailable due to being underwater, and the noise of the heavy guns giving the deck crew shellshock)

Retrieved from "https://allthetropes.org/w/index.php?title=Military_Mashup_Machine&oldid=1902683"
Categories:
Cookies help us deliver our services. By using our services, you agree to our use of cookies.