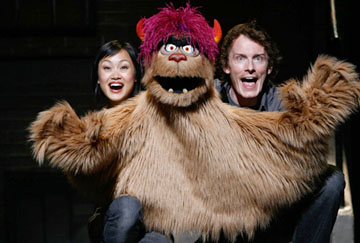 Why you think the 'net was born?

Multiple-Tony Award-winning musical about a group of friends trying to live out their dreams, despite such mundane obstacles as trying to hold a job. The show is loosely based on and inspired by Sesame Street, though it handles adult themes such as sex, drinking and pornography. Much of the humor is crude and the language is quite foul, and there is one on-stage depiction of puppet sex, so despite appearing to be a children's show, it is very definitely for mature audiences.

The main characters of the show are:

All of the characters except for Brian, Christmas Eve, and Gary are puppets. The singers are on stage, dressed in black, and although the audience is supposed to ignore their presence, they tend to act along with their characters. The puppets are supposed to represent humans, although the two monsters (Kate and Trekkie) are treated as a separate race, just like white, black, etc, and are distinguishable by the fact they're plush, while the other puppets are slightly fuzzy felt.

Avenue Q is the Trope Namer for:
Tropes used in Avenue Q include:

Nicky: Schadenfreude, huh? What's that, some kind of Nazi word?

Princeton: [gasp] You can't put your finger there! [gasp] PUT YOUR FINGER THERE!

Lucy: [I don't need] some well-hung, baby-face kid, who leeches from his parents and can't get his act together!
Princeton: Wait... I think I heard a compliment in there!

"Crabby old bitches are the backbone of this country!"

Kate: Whose life sucks more, mine or Brian's?
Rod and Nicky: OURS!

Rod: ...an afternoon alone with my favorite book: "Broadway Musicals of the 1940s"