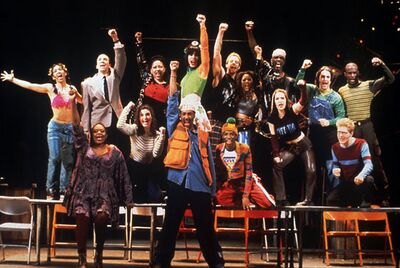 The original Broadway cast in its full, GLBT-riffic glory.

A modern-day Rock Opera adaptation of Puccini's La Boheme, written by Johnathan Larson (who died before the show was staged), RENT centers around a group of New York bohemians in the early nineties, including:

Notable for its revitalization of the musical theatre genre among young people, its ground-breaking portrayal of people with AIDS, and its obsessive fanbase.

Tropes used in Rent include:
Retrieved from "https://allthetropes.org/w/index.php?title=Rent&oldid=1724890"
Categories:
Cookies help us deliver our services. By using our services, you agree to our use of cookies.