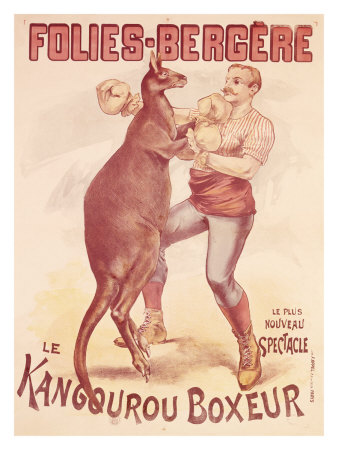 Truth in Television. During the 1800s (and even into the early 1900s), "boxing matches" that pitted a man against a kangaroo were part of traveling shows in Australia, the Western United States, and sometimes elsewhere. Men were challenged to defeat... or sometimes just last a single round... against a tame kangaroo. Usually, the men got their asses handed to them. Every once in a while, someone will revive the idea. Never mind the fact that a fully grown kangaroo can disembowel and kill their opponent with a single kick. Up for a fight, Skippy?

In media, kangaroos are often portrayed as either literally wearing boxing gloves, or else as capable of boxing moves. The origins of this image lay in the fact that, when defending itself, a kangaroo uses its upper legs (the ones usually thought of as "arms") first, to hold an opponent in place, while it rakes its opponent with its lower legs, thus giving the animal, for a short while, anyway, the appearance of "boxing".

Often Played for Laughs, despite the brutal ass-kicking the humans usually receive.

A Sub-Trope of Kangaroos Represent Australia.

Examples of Boxing Kangaroo include:

Retrieved from "https://allthetropes.org/w/index.php?title=Boxing_Kangaroo&oldid=1632082"
Categories:
Cookies help us deliver our services. By using our services, you agree to our use of cookies.