The Legend of Zelda: Oracle of Seasons and Oracle of Ages 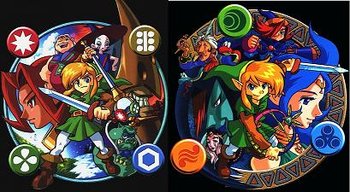 The seventh and eighth games in The Legend of Zelda series were developed by Capcom and released at the same time on the Game Boy Color in 2001. Oracle of Seasons and Oracle of Ages are the first portable Zelda games since Link's Awakening, and use similar graphics and gameplay styles.

Their most notable feature is the "Linked Game" system, which means that after you finish one game you can link your saved file to the other game and continue your adventure as a sequel. Other new elements include collectable rings with special abilities that can also be traded between the games.

Each Oracle game starts with Link being called to a new world by the Triforce. In Seasons he is called to the world of Holodrum and meets a mysterious dancer called Din, who turns out to be the Oracle of Seasons. Resident villain and Black Knight Onox captures her and sends the Temple Of Seasons underground, throwing the world's seasons into disarray. To save the world, Link must collect the Essences of Nature hidden across Holodrum, use their power to confront Onox and rescue Din. To aid his quest, Link is given the Rod of Seasons, which he can use to manipulate the seasons and open up new ways forward: for example, overgrown vines blocking a tunnel in Spring will have wilted in Winter.

In Ages, Link has been sent to the world of Labrynna. He meets a mysterious singer called Nayru, who turns out to be the time-travelling Oracle of Ages. Resident villain and sorceress Veran possesses Nayru's body and uses her power to travel centuries into the past, where she intends to manipulate the royal family into creating an Evil Tower of Ominousness. To save Labrynna from Veran's machinations, Link must collect the Essences of Time hidden across the world by using the Harp of Ages to travel between the past and present ages.

An interesting fact about these games is that they are the first canon Zelda games created with third-party involvement. It was originally titled The Triforce Series and was intended to be a trilogy of games with the same premise of linking the games together (in any order) to form one solid narrative. However, complications and budget forced a reduction to two games. In addition, one of the games was intended to be a remake of the first Zelda game, which was reworked into Oracle of Seasons after the Triforce Trilogy was cancelled, explaining why Holodrum's game map was similar to the map of the first Zelda game.

Capcom would later assist in Four Swords and The Minish Cap.

Tropes used in The Legend of Zelda: Oracle of Seasons and Oracle of Ages include:
Retrieved from "https://allthetropes.org/w/index.php?title=The_Legend_of_Zelda:_Oracle_of_Seasons_and_Oracle_of_Ages&oldid=1730495"
Categories:
Cookies help us deliver our services. By using our services, you agree to our use of cookies.