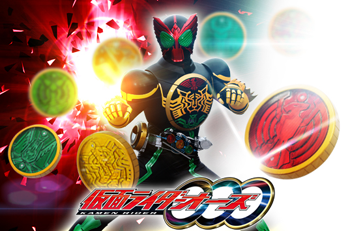 The story opens with the reawakening of the Greeed [sic], who are monsters formed from human desire. Each Greeed possesses a number of Core Medals that form the heart of their bodies, and they seek to complete their immature forms by feeding on desire in the form of Cell Medals, which they collect through lesser monsters called Yummy. There's also a prophecy that whoever obtains every Core Medal shall become the destined "Multi King" of the Greeed.

Enter Eiji Hino: an Unlucky Everydude and vagrant without any kind of drive, ambition or passion. He runs into Ankh, a bird-type Greeed (and Magnificent Bastard) whose body has been reduced to a single arm. Having plundered several Core Medals from the other Greeed but without a body to use them, Ankh manipulates Eiji into accepting a forbidden Transformation Trinket and using his Core Medals to transform into Kamen Rider OOO. Eiji just wants to use the power to protect others, but Ankh plans to use the naive boy as his Unwitting Pawn to destroy rival Yummy, rebuild his body from their Cell Medals, and seize the power of the Multi King for himself. There's also the Kougami Foundation, an Omniscient Council of Vagueness who pledge their resources to help Eiji in his fight against the Greeed.

The major recurring theme in Kamen Rider OOO is about "desire"[1] or "greed". The interesting part is that rather than painting a clear Black-and-White picture about the topic, the story maintains a balance between excess and void - in short, it presents a pragmatic view about desire.

Kamen Rider OOO's airing also coincided with the 40th anniversary of the franchise. So, even though he was never promoted as an anniversary Rider, OOO ended up headlining a commemorative 1000th episode of the Kamen Rider series and even the OOO, Den-O, All Riders: Let's Go Kamen Rider movie, where the DenLiner crew and even Rider 1 and 2 also receive a fair amount of focus, but the story was generally told from the OOO cast's point of view.

Tropes associated with the Rider concepts of Kamen Rider OOO: