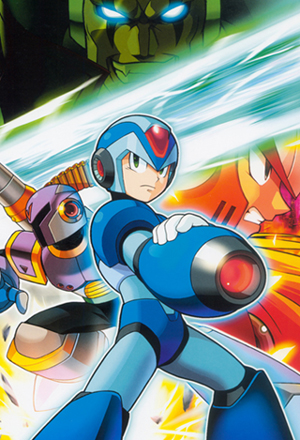 As his final masterpiece, Dr. Thomas Light created Mega Man X, a robot with a special "X-factor" that allows him to think, feel, and make decisions like a human does. As the page-topping quote points out, Light sealed X sealed inside a capsule designed to run ethics testing over the course of a few decades to ensure X would not turn out evil. A century later, scientist Dr. Cain unearths X's capsule and finds himself astounded by Dr. Light's engineering miracle. He decides to mass-produce a line of robots based on X, naming them "Reploids" ("Repliroids" in Japan), but glosses over the fact that he doesn't understand all of X's systems. What Could Possibly Go Wrong?

Soon after their activation and deployment into the world, some of Cain's Reploids begin developing serious bugs and glitches that cause them to become extremely violent—and, in many cases, outright insane—and break the First Law of Robotics ("A robot must never harm a human being"). These malfunctioning Reploids become known as Mavericks ("Irregulars" in Japan); to combat the Maverick menace, Dr. Cain helps create the "Maverick Hunters," a group of advanced Reploids authorized to use force in apprehending or outright stopping their violent brethren.

Cain's work backfires once again when practically the entire Maverick Hunter group, including Sigma—Cain's first Reploid and the leader of the group—turn into Mavericks themselves. Why the others turned, we have no idea, but Sigma turned soon after getting into a fight with "Zero," a mysterious and insane robot of similar capability to X (but of unknown manufacture). Sigma's defection heralds the beginning of a massive war between Mavericks and humanity—and since he feels responsible for the Maverick outbreak, X decides to team up with Zero (who turned sane after his fight with Sigma) and put a stop to the war.

The series saw several sequels on the Super Nintendo, Playstation, Sega Saturn, Playstation 2, and Gameboy Color. It also spawned Mega Man Zero, its own (some might claim even Darker and Edgier) Sequel Series for the Gameboy Advance, in 2001. An anime OVA, The Day of Sigma, came with the PSP updated release of the first game (Maverick Hunter X).

Do not confuse this series with Mega Man 10, the tenth game in the original line's series (which came out well after Mega Man X did).

Two character sheets exist for this franchise: one for the main series, and one for Command Mission.

Games In The Series

Tropes used in Mega Man X include:
Retrieved from "https://allthetropes.org/w/index.php?title=Mega_Man_X&oldid=1963439"
Categories:
Cookies help us deliver our services. By using our services, you agree to our use of cookies.