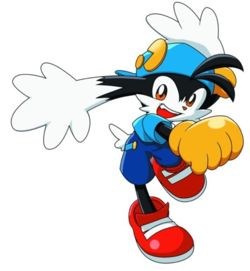 The Klonoa series comprises several 2½D Platformers starring the eponymous... creature. Exactly what he is remains undefined throughout the games' 10-year history; the only explanation being that he is a 'Dream Traveler'. That is more of a job description; Klonoa's main goal in each of the games -- in which he and his abilities remain virtually the only constant -- is to solve the mysteries of the dream worlds he finds himself inhabiting.

The games are, roughly in chronological order:

A remake of the original, this time for the Wii, was released in 2009. Klonoa also appears in Namco Bandai's Massive Multiplayer Crossover Namco x Capcom, while the character often winds up getting cameos in the Tales games (the most notable, from Tales of Symphonia, being a full costume for the Cute Bruiser, complete with deadpan "wahoo").

Klonoa avoids some of the major issues with voiced cutscenes needing expensive localization by having the characters speak in a gibberish language that is neither Japanese nor English. Text-based translations of the dialogue are shown as in traditional games. One could easily assume that the game is using stock gibberish clips for each character, were it not for the fact that the voiced lines include recognizable proper nouns (albeit heavily accented in the Klonoa-ese; for example, the text "Klonoa" usually gets voiced as "Klo~oa"). The Wii remake offers this and a proper language track.

This series has a Character Sheet, currently under construction.

Tropes used in Klonoa include:
Retrieved from "https://allthetropes.org/w/index.php?title=Klonoa&oldid=1622862"
Categories:
Cookies help us deliver our services. By using our services, you agree to our use of cookies.