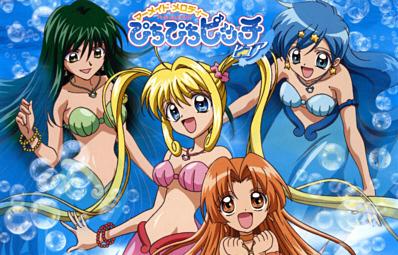 Pichi Pichi Pitch combined two subcategories of Magical Girl -- the Magic Idol Singer (sans Older Alter Ego for once in the genre) and the Magical Girl Warrior-- in a sugary show and maturing manga that took style and substance from the original The Little Mermaid story and plunked it into a magical world of princesses battling demons.

Nanami Lucia is the new girl in town, and with her foreign name, clumsy nature and odd talking penguin friend Hippo (more of a nagging guardian than anything), she's got enough problems. Of course, she's also the regent monarch of the North Pacific Ocean, with the title of Pink Pearl Princess -- except she lost her pink pearl. And by "lost", she means "gave away", to save a drowning boy back when she was six. The boy turns out to be school idol and international competitive surfer Doumoto Kaito, and he's being targeted by the same league of sea demons that destroyed the kingdoms of the Atlantic princesses Hanon and Rina and kidnapped the Arctic and South Pacific princesses. Lucia (now with her pearl back), Hanon and Rina have to save those two, find the other two princesses that disappeared after the attacks, and navigate Lucia's love life, except, oh yeah, mermaid legend goes that confessing your identity to a human will turn you into seafoam.

Although the anime is sugary and child-friendly, and the manga was serialized in the cute Nakayoshi, the latter is a lot more dark and mature. Lucia and Kaito have a lot more subtext going on, embarrassing situations are more so (for example, in the manga, Lucia accidentally wins a beachside beauty contest when her bikini top comes undone, flashing the audience; in the anime, another girl wins and Lucia's much more modest suit is saved) and there's a bit of gore and more threatening villains.

Another thing that sets the Pichi Pichi mermaids apart from their contemporaries is the combination of the Magic Idol Singer and Magical Girl Warrior. Lucia and friends need their pearls to sing, and sing well; their singing voices can defeat the enemies, and upgrades come via new songs for their repertoires. Each girl, except for Noel and Coco, who spend most of their time in the background, also gets her own Image Song that can be used either in battle or in dramatic situations. In the second season and the second half of the first, some villains also get their own songs, and due to So Last Season, the old songs are only good for dramatic moments, making it even more like a musical.

Once licensed by ADV Films, only to be dropped a year later when they couldn't find a TV deal for the 52-episode first season. The manga is licensed and has been released in its entirety by Del Rey.

Retrieved from "https://allthetropes.org/w/index.php?title=Mermaid_Melody_Pichi_Pichi_Pitch&oldid=1612345"
Categories:
Cookies help us deliver our services. By using our services, you agree to our use of cookies.