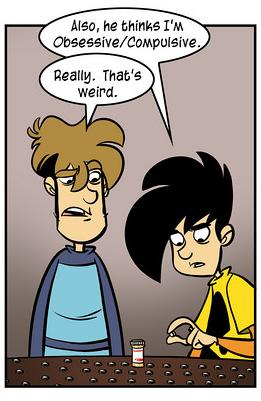 I have CDO. It's like OCD, but with the letters in alphabetical order -- like they're supposed to be.
—Chris Addison in Lab Rats

Recently "upgraded" to Acceptable Targets, someone with Super OCD requires ORDER in their life. Everything has to match some kind of pattern that they approve of. Lines must be straight, angles must be just the right degree, and the numbers must absolutely match. This doesn't have to be a pattern that makes sense. Social skills will be extremely difficult. In some genre, this comes side-by-side as an Equivalent Exchange for some kind of math power or Hyper Awareness.

Obsessive-Compulsive Disorder is frequently misrepresented in fiction. Most people are surprised to find that rituals are not the defining trait of OCD—in reality, it is an anxiety disorder that causes repeated, unwanted thoughts. The rituals (which may or may not have anything to do with order) are simply attempts to stop those thoughts. Fiction so exaggerates the "order" part in OCD that people are downright dumbfounded to find out that OCD/ADHD exists (Obsessive-Compulsive Personality Disorder, on the other hand, really is all about order).

Can be Justified if the character has a career in chemistry or something similar, where it really is crucial to have measurements and such just right.

Often a trait of the Defective Detective or the Mad Mathematician. See also Schedule Fanatic, a person who requires everything to be done precisely on time. For a less extreme version, see Neat Freak. When this becomes a super power see Clock King. A certain type of character will act like this for no other reason than to annoy people.

Examples of Super OCD include:

"A world where garbage bags have built in handles. Where zip-lock stripes turn green, to assure proper sealage. Where spray cleaner comes in a bottle with setting both spray and stream. So many gifts they have, so untidy they are. Rejected though I am, I will leave them with this gift: a world of perpetual neatness. With a place for everything -- and everything in its place!"

some kind of obsessive-compulsive need for things to line up straight in three-dimensional space - the corners of the tent not matching in elevation, say, or pictures needing to be hung exactly evenly on the walls.

Howard: Who cares where you sit? You are not crazy!

Sheldon: These shrimp are all the same size, there's no logical order to eat them in. [chucks them into the garbage can]