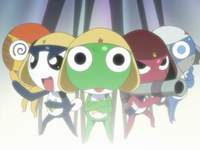 From L to R: Kululu, Tamama, Keroro, Giroro, and Dororo. For simplicity's sake, the enormous supporting cast is omitted.

What are you talking about? I'm just a slightly overgrown and slightly mischievous normal frog. I've never even thought about invading Pekopon.

Originating as a gag-manga by Mine Yoshizaki, published in Shonen Ace starting in 1999, and every bit as goofy as its English title, Sergeant Frog would suggest, Keroro Gunsou is the story of a not-so typical Japanese family and the alien frogs who turned their lives upside-down.

When pre-teen paranormalist Fuyuki Hinata (age 12) and his tomboyish sister Natsumi (age 13 in the anime, 14 in the manga) discover an alien in Fuyuki's bedroom, it's just the beginning of their troubles. This alien, Sergeant Keroro, is the leader of a recon team for an alien invasion from Keron, "the 58th Planet of the Gamma Nebula". But once his superiors realize he's been found out, they abort the mission and leave him and his crew behind. With no one else to turn to, Keroro ends up staying at the Hinata house with Fuyuki, Natsumi, and their Hot Mom Aki, living as something between a servant and a pet.

Of course, Keroro is still an invader, and still plotting the downfall of "Pekopon" (his species' name for Earth in the anime -- Pokopen in manga)... when he's not doing chores for the Hinata family, or being distracted by such aspects of Earth culture as Gundam model kits and the Internet. Before long, Keroro manages to reunite with his squad-mates: hot-headed rookie/Keroro fanboy Private Tamama, hard-boiled combat specialist Corporal Giroro, smarmy intelligence officer Sergeant Major Kururu/Kululu, and Lance Corporal Dororo. With this eclectic crew, Keroro attempts to conquer the planet through one convoluted scheme after another, though sometimes he feels torn between his mission and his obligation to the Hinata family... but not that often.

Surprisingly, for a series that's not meant to be taken seriously, often has No Fourth Wall, and is frequently brimming with pop-culture references, it has a lot of heart (which may be why they got Junichi Sato to direct the anime). Though it stops far short of being sappy, there are many heartwarming moments sprinkled in that sometimes constitute Tear Jerker material. It's still firmly in the comedy genre, though, and hence, occasionally brings these scenes to an abrupt halt with a quick joke.

Rounding out the cast is an assortment of eccentric humanoids, including Momoka Nishizawa, bi-polar scion of a multi-billion-dollar international corporation who hangs out with Tamama and has a serious crush on Fuyuki; Mutsumi Saburo, a smooth talking poet/artist/radio show host who hangs out with Kululu; Koyuki Azumaya, New Transfer Student and Ninja girl who hangs out with Dororo and is a rather close friend of Natsumi; and Angol Moa/Mois, a ditzy alien girl who has a crush on Keroro and the power to destroy an entire city block with literally a fraction of her power ("Armageddon One Ten-Millionth!").

Insanely popular in Japan, the manga was eventually released in North America in 2004 by Tokyopop, with the title Sgt. Frog. An anime adaptation naturally followed, also begun in 2004. In November 2006, ADV Films announced that they had acquired the rights to the anime version. However, after nearly two years without a single word on the project save for a couple of trailers, FUNimation acquired the distribution rights in 2008 (along with about 30 other ADV titles). After a bit more Development Hell, the first season 1 DVD was released September 2009. Episodes can be viewed on Funi's video portal. By March 2010, all of the first season had been released on DVD - split into two "seasons" for whatever reason. In February 2011, Funimation announced that it has licensed further seasons and will continue the dub. Adding to the multimedia franchise, Namco Bandai released an RPG adaptation using the Tales engine in March 2010.

Tropes used in Keroro Gunsou include:

Keroro: 'What flavour is your blood?!'

of the cast (including a robot duplicate of the sergeant mentally controlled by Keroro) shrinks down and enters his mouth to fight them off.

Subtitle: "The narrator sucks!"
Narrator: Here's a caption: Bite me!

Kululu: "We're all tired of your complaining about how you hate the show, and how you're only here because of your gambling debts!"

Narrator: Okay, someone remind me how this is all my fault?
Fuyuki: Because you hate the show?