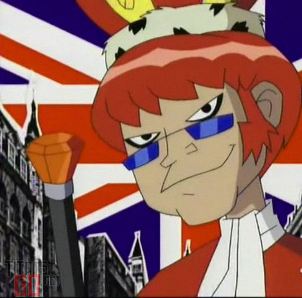 Any character with a British accent, particularly an upper class English one (which tends to be the only type you hear in American media) is likely to turn out to be a villain.

This includes all evil characters with British accents (where the rest of the cast has accents), whether or not they are actually stated to be British. Quite a few of these are not actual Brits, but have anomalous quasi-British (usually vaguely upper-class and English, as noted above) accents in settings where almost everyone else has some sort of American accent and no one is necessarily supposed to be from either country, just to mark that character as villainous. As you might expect, this version appears to be associated with films and shows in which the use of English is (at least weakly implied to be) a Translation Convention for whatever the characters are "really" saying, although it's not exclusive to them. See The Queen's Latin and Aliens of London.

Villains of this type come in two flavours. The first is usually wealthy and snobbish, and probably quite well educated. The second is the hooligan with the Cockney (or similar) accent.

This is fairly recent since during Hollywood's Golden Age it was acceptable for the good guys to speak with an upper-class English accent as well.

Probably related to The Mean Brit, although it appeared well before The Mean Brit trend began. The Romans, who generally are the baddies in most historical films, are almost always played by English actors. The British also are often the imperial bad guys in Hong Kong kung-fu flicks. World War II films using the Translation Convention usually have Those Wacky Nazis played by Brits as well. Perhaps surprisingly, they are quite rare in Irish films.

Given the way in which American fans often respond to British accents, fandoms sometimes turn this sort of character into Draco in Leather Pants.

Contrast British Stuffiness, which may be applied to a nominally heroic character who must nevertheless Die for Our Ship. Don't confuse the vaguely British-flavored Mid-Atlantic Accent for a genuine British accent, though.

Doesn't really apply in British works, of course. In those, this role is often given to the French, Germans or (rarely, especially nowadays) Americans.

See also I Am Very British.

Examples of Evil Brit include:

Retrieved from "https://allthetropes.org/w/index.php?title=Evil_Brit&oldid=1957173"
Categories:
Cookies help us deliver our services. By using our services, you agree to our use of cookies.