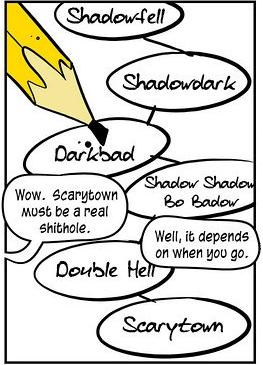 Some cities have cute names. Some weird names. And some have no name at all.

And then there are these places. They have names like 'Doomville', 'New Evilsberg', 'Murder Plains', and 'Hell's Bathroom, New Jersey'. It doesn't matter if it's one of the nicest towns you've ever seen, if it's named Death City, it's one of these places.

Note: if the place has a bad reputation, but the name itself is not scary (like Camp Crystal Lake or Sunnydale), it does not count. These are places that tell you right up front: this is not a nice place.

Related to Doomy Dooms of Doom. The location counterpart to Names to Run Away From Really Fast. The inverted version of this trope would be Super Fun Happy Thing of Doom, except in that trope, the thing must be actually bad.

You probably won't want to visit places with names like these:

Recorded and Stand up Comedy

Retrieved from "https://allthetropes.org/w/index.php?title=I_Don%27t_Like_the_Sound_of_That_Place&oldid=1893432"
Categories:
Cookies help us deliver our services. By using our services, you agree to our use of cookies.