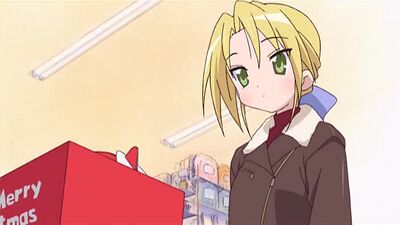 Nanako Kuroi, age 27 and still single. "You are wanted."

Buying a cake for Christmas is a Japanese tradition. Unfortunately, no matter how tasty a Christmas cake is, no one wants it after December 25. And no matter how attractive a woman is, it's said, no Japanese male will want to marry her after she's 25. Thus, Christmas Cake is used as a metaphor term for what Western audiences might call an "Old Maid." It's a common trope for a character to at least be surprised that another isn't married yet by this age. Even when the writers are sympathetic to the character, nagging to marry will still come from someone, usually her parents.

A Cool Big Sis may be one, or heading there, usually with extreme annoyance; referring to this character as Oba-san is about as tactful as referring to someone as Ma'am and is likely to induce a rage. Sometimes this is just a device to explain them hanging around other characters younger than them.

On the antagonistic side, a Punch Clock Villain is often a Christmas Cake. She tends to be very attractive but is relegated to cake status by annoying habits. The other problem occurs if she's also stuck in an Fundamentally Female Cast or any such place where men are slim pickings. The Competence Zone might force her to hang around and even fawn over men much younger than her.

Interestingly, the more unexpected the presence of the Christmas Cake is, the more likely her being one is emphasized as being an attractive point. If a character expresses this point in-story, he Likes Older Women.

This is on its way to being a Discredited Trope: the latest Japanese census data shows that more and more people are marrying older, with most people under 25 remaining unmarried. Many teens and young adults have never heard of the concept and many that have think it's old-fashioned. Having a character believing in the Christmas Cake concept may mark them as being likewise old-fashioned.

See also Hot Mom, Grande Dame, and Maiden Aunt for the much older Western variants. Also see My Biological Clock Is Ticking and I Want Grandkids. For people older than the average brand of Christmas Cake, see Grandma, What Massive Hotness You Have!. Contrast with Likes Older Women. Not to be confused with Fruit Cake. Not to be confused with being a lie, either. Compare and contrast with Stacy's Mom, an older character who has an excess of younger suitors.

The Christmas Cake trope is related to Never a Self-Made Woman. As the Japanese-culture specific variant of Old Maid, only Japanese examples should be listed here.

Another more modern, but no less blunt, term used in Japan is "urenokori", which is also a term for leftover unsold items in a store's inventory. Yeah.

Examples of Christmas Cake include:

Retrieved from "https://allthetropes.org/w/index.php?title=Christmas_Cake&oldid=1899217"
Categories:
Cookies help us deliver our services. By using our services, you agree to our use of cookies.