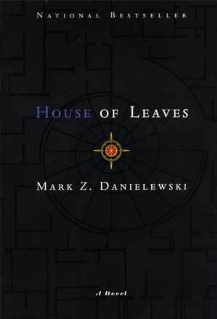 This is not for you.

House of Leaves is a 2000 novel by Mark Z. Danielewski. What about its plot?

Okay, imagine that this family is moving into a new house to jump-start their lives together. Will Navidson's a world-renowned photojournalist with lingering family issues, Karen Green is a former model with self-esteem issues, and Chad and Daisy are their two lovable children. Will decides to make this move-in a documentary of how he got his life back on track, and he mounts video cameras and microphones in different rooms of the house. About a month after they move in, the family goes to visit Karen's parents. When they return, there's a new addition to the house, a closet with a connecting doorway, between the master bedroom and Chad and Daisy's room. Furthermore, out of curiosity, Will measures the inside of the house compared with the outside to find out something startling: the inside is bigger than the outside by one quarter of an inch...

Hold on, that's not what this book is about at all. The Navidson Record is a recently-released documentary-style horror film with the plot described above, somewhat in the style of The Blair Witch Project, which opens to wide acclaim. It spurs countless theses and criticisms from academia, both for its moving themes and character studies but also for the perplexing riddle of the house and what it truly represents. Is it a throw-back to ancient customs? Perhaps the house is a Derrida-esque deconstruction of religion? Does the house, in fact, represent a vagina? A Portuguese(?) man named Zampanò assembles these criticisms and writes what is considered a top-notch commentary on the film and how it explores deep symbolic themes of family, tragedy, echoes, and the perceptual confusion and terror of labyrinths...

Wait, that's not right either. In fact, it's about what happens when one night, Johnny Truant and his friend Lude check out the apartment of a recently-deceased neighbor. Inside, they find the apartment has had all of its windows painted black with curtains hung over them to conceal all light, and the floor is literally crisscrossed with taped-down measuring tapes. Several parts of the room seem to have been destroyed by an incredibly strong man or some large creature. Inside, Truant finds the disheveled remains of a complex manuscript (the critical novel written by Zampanò) and slowly begins to piece it together, but as he does so, the world he used to know becomes infinitely more frightening...

No, no, that's still not quite hitting the core of this book. Okay, the real story is about Pelafina H. Lievre, a woman who is locked up inside the Three Attic Whalestoe Institute, a mental institution. She is the mother of a lovely boy named Johnny, and she's being treated for having hallucinations and breaks from reality that caused her to harm poor Johnny. Her only love in life anymore since the death of her poor husband is her son, and she writes him a series of letters expressing regret over her past actions. In the correspondence between them, she stresses that he is a brilliant child, and that if he puts his mind to it he can achieve anything. These letters grow more and more disturbing over time as her mind begins to break down...

Wait, no, that's still not right. Okay, you're interested in what House of Leaves is about, right? Well, this book is about that point directly behind your head. Don't look.Ω Don't take your eyes off this page, off the safe glow of the monitor, the comforting shapes of the letters making up this sentence. This is safe. What's behind you isn't. Keep reading these words. If you stop to look behind you, I can't guarantee you'll come out of this ordeal alive, much less sane. Pretty soon you might find yourself doubting what is real and what isn't. Pretty soon you might start to have the nightmares. One day you'll wake up to find yourself an emaciated wreck who can't trust space and time anymore. Whether something is real or not doesn't matter here; the consequences are the same. What you need to realize is that this is not for you.

Or you can have some pancakes with some delightful reading.

142 Via Google Translate From French: "Looking into the eyes of death is intoxicating."

Not to be confused with House of Five Leaves, and certainly not with Dead Leaves. See also Poe, Danielewski's sister, whose album Haunted serves as a companion piece to the novel. Compare "Tlön, Uqbar, Orbis Tertius".

Tropes used in House of Leaves include:

Retrieved from "https://allthetropes.org/w/index.php?title=House_of_Leaves&oldid=1885770"
Categories:
Cookies help us deliver our services. By using our services, you agree to our use of cookies.