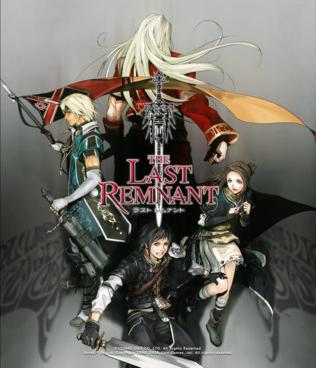 The Last Remnant is a RPG for the Xbox 360 and PC (a Play Station 3 port was originally planned but seems to have been quietly canned) developed by Square-Enix.

The plot concerns the efforts of a young man named Rush Sykes as he attempts to rescue his sister Irina from a secretive faction involved in forbidden experiments with preternatural artifacts called Remnants. Rush soon finds allies in the form of David Nassau- the marquis of a nation called Athlum- and his four loyal generals. Meanwhile, a mysterious Badass known only as The Conqueror has begun to lead an army through the nations of the world, seizing any and all Remnants in his path.

Combat in The Last Remnant is similar to games like Ogre Battle: The March of the Black Queen, Soul Nomad and The World Eaters, and Romancing SaGa. Instead of controlling single characters, one groups individual characters (units) into squads (called 'unions' in the game). One then controls these unions in battle by issuing general commands, such as "Attack them with everything you have!" or "Keep your HP up!".

The Xbox 360 version was heavily criticized for having massive amounts of slowdown during battles, as well as many other graphical misgivings that push it into Obvious Beta territory. This was blamed on a few things: the release was rushed to meet deadlines, and it was the first time Square Enix had used the Unreal Engine (which carries a few graphical quirks of its own) to make a game. Installing the game to the hard drive does fix the majority of the slowdown, but not perfectly.

The Updated Rerelease for the PC cleaned up all these glitches, eliminated the slowdown, removed the hated "Leader" designation, added a Turbo Mode to speed up battles, added new content (including the free DLC offered to Xbox owners), tweaked the game balance and generally gave the whole thing the kind of polish it should have had in the first place. The result was a game that was far more favorably received.

Tropes used in The Last Remnant include:
Retrieved from "https://allthetropes.org/w/index.php?title=The_Last_Remnant&oldid=1684160"
Categories:
Cookies help us deliver our services. By using our services, you agree to our use of cookies.