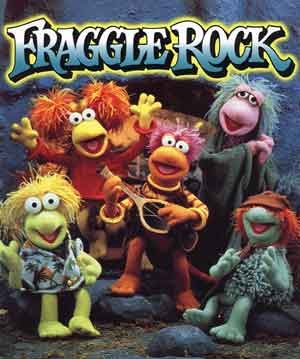 Let the music play down in Fraggle Rock!

The story goes that Jim Henson was taking a long and boring trip and mused aloud, "I'd like to make a TV show that brings about world peace."

The result of this idea was Fraggle Rock, produced for the CBC in Canada, and aired on HBO in the U.S. in 1983-87. The series depicted a colorful and fun world, but it was also a world with a relatively complex ecosystem. The different races of creatures were each connected through symbiosis, even though they never realized it. This was meant as an allegory of the human world, where each group was somewhat unaware of how interconnected and important they were to one another. Creating this allegorical world allowed the program to entertain and amuse while seriously exploring complex issues of prejudice, spirituality, personal identity, ecology, and social conflict.

The series' triumph, by far, was being able to express all of this onscreen without being Anvilicious or insulting the intelligence of its young audience. By the second season, there wasn't an issue they wouldn't tackle. The writers refused to over-simplify any individual issue, and instead simply illustrated the consequences and inherent difficulties of different actions and relationships. Though the Fraggles do learn important lessons, they are rarely self-conscious about it.

And furthermore, the series is fun as hell. With wall-to-wall music and engaging characters in a fantastic, well-realized setting, you barely notice that you're learning any life lessons at all. It also contains some of the most astonishing and ingenious special effects ever devised for a Muppet series. Many have argued that the series is even better when you go back and watch it as an adult with your own children.

The ideals of friendship, being true to yourself and learning to love those who are incredibly different were the cornerstones of Jim Henson's work throughout his career, and he considered Fraggle Rock to be one of the purest and most successful expressions of that vision. In turn, many Henson fans have agreed that Fraggle Rock may be his masterpiece.

A far less successful Animated Adaptation for NBC followed in 1987-88, which was animated by the same crew who worked on Muppet Babies. It was released on DVD in January 2010.

A comic book continuation by Archaia Entertainment began in 2010 and is still running.

Fraggle Rock is part of the programming schedule for The Hub.

Not to be confused with where the pilgrims landed.

Tropes used in Fraggle Rock include:
Retrieved from "https://allthetropes.org/w/index.php?title=Fraggle_Rock&oldid=1740627"
Categories:
Cookies help us deliver our services. By using our services, you agree to our use of cookies.