Everything About Fiction You Never Wanted to Know.
(Redirected from Star Trek Generations)
Jump to navigation Jump to search 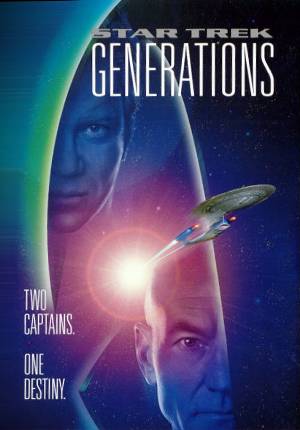 The first movie featuring the cast of Star Trek: The Next Generation. Billed as a Crossover (Cross Through?) with Star Trek: The Original Series, although Kirk is merely given The Cameo and then gets a bridge dropped on him. Yep, They Wasted a Perfectly Good Plot.

It's shortly after the end of the Next Generation TV series, which ended its run just before this film was released. Our baddie is Dr. Soran (Malcolm McDowell), a Mad Scientist with a malicious agenda reaching back seventy-eight years to when he was "saved" from the Nexus by Kirk, who then disappeared into it himself and was presumed dead. Soran now plans to blow up a couple suns to get back into the Nexus, but Picard gets Kirk to leave the Nexus and join him for a bridge-dropping climax.

Perhaps the best that could be said for Generations is that it's not too badly paced considering how thin the storyline is. Still, the plot is mostly just a vehicle to bring Kirk and Picard together, their meeting only occurs at the end and the final battle is over too quickly and extremely predictable. Despite this, Kirk's eventual death is fairly moving.