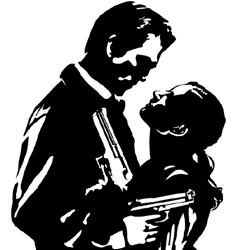 "The cold night unfolded. In front of me, those eyes, slits of white promising-"
"Max, stop it."
"Sorry, force of habit."

Three years ago, NYPD detective Max Payne's wife and baby daughter were killed in their home by junkies strung out on the designer drug Valkyr. Since then Max has transferred to the DEA and gone undercover with the Punchinello mafia family, intending to bring the Valkyr drug ring down once and for all. Then one night, as New York settles into the worst snowstorm in decades, Max's partner is murdered, Max is framed for it, and his cover is blown. With the police hot on his trail, Max wages a one-man war on the mafia, killing everyone in his way as he gradually unearths the truth behind the creation of Valkyr and the death of his family.

This Third-Person Shooter from Remedy was an attempt to break video games into an untapped genre, Film Noir. A mixture of both the film and graphic novel treatments of noir, it featured such stalwart elements of the genre as the hard-boiled cynical hero, the capable and mysterious femme fatale, and the convoluted criminal plot with myriad linear and tangential echelons of villains, all played under a gravel-voiced narration laden with gothic imagery and twisted arthouse metaphors. There are even a number of references to Norse mythology. The cutscenes were told in graphic novel form, made by photographing the scenes and altering them digitally to resemble watercolor drawings.

The game's biggest selling point, however, was the use of Matrix-style Bullet Time (despite the game being in the works before the movie came out), which allowed the player to slow down key points of the game while letting them aim and react as usual, which gave them an edge over the bad guys as well as looking darn cool. The game also impressed with its highly interactive environments, deep soundscape and interesting aspects of gameplay such as playable dream sequences.

Two years later, Max Payne 2: The Fall of Max Payne came out, in which Max investigates a highly organized and well-funded group of assassins who are wiping out the powerful syndicate The Inner Circle, while becoming entangled with the Circle's possibly-trustworthy-who-knows hitwoman Mona Sax. This second featured better sound and graphics, actual in-engine cutscenes with new animation beyond the standard AI movements, more varied gameplay (including having Mona appear as a playable character for several chapters), and an original song by the newly-formed Poets of the Fall. It also rewarded patient players with several additional stories they could choose to watch; if Max stopped at the various televisions scattered around the game, he could catch the latest episode of the obnoxious animated series Captain Baseball Bat Boy, the self-mocking cop show Dick Justice, the amusing period soap Lords and Ladies or the surprisingly creepy, Twin Peaks-like psychodrama Address Unknown.

Due to a combination of Max Payne 2 selling poorly and Remedy getting bogged down working on Alan Wake, it took eight years for Max Payne 3 to be developed and released. It was developed entirely by Rockstar, with no design work but constant feedback from Remedy. Set eight years after the end of Max Payne 2, the third game finds an alcoholic Max trying to make a fresh start by accepting a job as a private security guard for the wealthy Branco family in Sao Paulo, Brazil. After his employer's young wife is abducted by a band of paramilitary extremists as part of what appears to be a ransom plot, Max sets out to sober up and get her back. It has received quite favorable reviews from critics, and despite being released the same day as Diablo III, it managed to sell 3 million copies in the first week.

A Hollywood movie based on the characters was released in 2008 to a poor reception, but modest commercial success. Related tropes should go to its separate page.

The Trope Namer came like a hurricane.
The weird list of items looked dangerous.
Retrieved from "https://allthetropes.org/w/index.php?title=Max_Payne_(series)&oldid=1679826"
Categories: