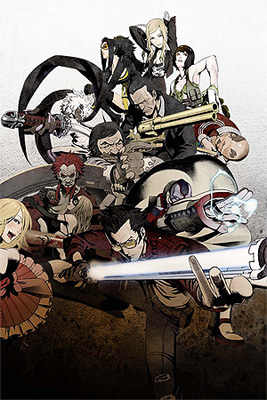 No More Heroes is the story of Travis Touchdown, a perennially-broke otaku who wins a beam katana off of "an Internet auction site" and becomes a part-time assassin to help pay for his pro wrestling videos and Anime merchandise after meeting with the mysterious Sylvia Christel in a bar. Upon becoming ranked the 11th-best assassin in the United States, Travis proceeds to climb the ladder of the United Assassin's Association the hard way: challenging the ten assassins ranked higher, and taking them all out.

From Suda 51, the mastermind behind the divisive Killer7, it's simultaneously a celebration and a Parody of sandbox games, American geek culture, and the concept of an Anti-Hero. With its tongue planted firmly in cheek, the game makes a point of never really taking itself or its medium seriously and fervently bulldozes the fourth wall from the second you turn it on. Combine this with the fast-paced hack and slash battles, no game lets you rain down on the bad guys like some sort of angry nerd god quite like No More Heroes. Well, except when you're taking part-time jobs. Assassination just doesn't pay like it used to.

One of the most niche types of games, it still managed to be a modest hit, and Suda's biggest selling game. This especially stands out when it's on the Wii, a system supposedly unfriendly to those kinds of games. While initially deemed a massive bomb after its disastrous launch in Japan, the game became a sleeper hit as it rolled out overseas.

No More Heroes 2: Desperate Struggle is the sequel, also for the Wii. It was released outside of Japan first, and was released in Japan in October 2010. With three different collectors bonuses for the continent with the game's smallest fanbase... You can watch the trailer here. The original game was given a remake in Japan for the Xbox 360 and Play Station 3, based on the belief it didn't sell well because the Wii supposedly couldn't sell those games. This belief got a dose of reality when the game opened only a little better than the first game (on both systems), and sales legs dropped off even more quickly.

Tropes used in No More Heroes include:
Retrieved from "https://allthetropes.org/w/index.php?title=No_More_Heroes&oldid=1724392"
Categories:
Cookies help us deliver our services. By using our services, you agree to our use of cookies.