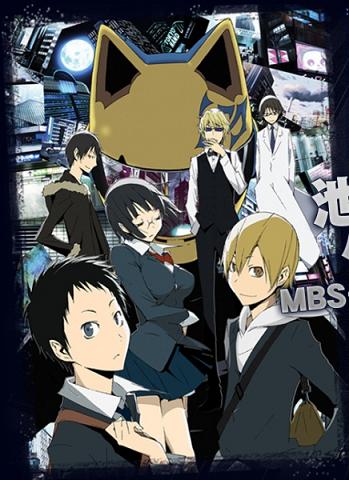 Ikebukuro, a district of Tokyo. A young man named Mikado Ryugamine has moved there from "the sticks", clueless as to how things work in the big city. Reunited with his childhood friend Masaomi Kida for the first time in years, Mikado is shown the way around town as he tries to adapt to the hectic ways of the busy metropolis and discovers its many dark secrets.

Word on the street is that a mysterious motorcyclist with no head called "The Black Rider" (a modernized Dullahan from Celtic Mythology) has been riding about committing acts of vigilante justice in a spectacularly violent fashion.

There's a guy who dresses like a bartender with inhuman strength, a shady Knowledge Broker, a genius Back-Alley Doctor, and a conspiracy about a pharmaceutical company involved in human trafficking. Then there's the "Dollars," a mysterious "colorless" gang whose members and activities are shrouded in secrecy.

Based on a series of light novels written by Ryohgo Narita, the mastermind behind Baccano!; with art and designs by Suzuhito Yasuda, of Yozakura Quartet fame. It can be read here.

An anime adaptation aired in Japan from in January through June 2010, running for 24 episodes, with two additional episodes on the DVD release. The anime adaptation was directed by Takahiro Omori and and animated by Brain's Base, the same studio/director combo that adapted Baccano!. Aniplex picked up the series for North American distribution, and the DVD releases were done in three groups in January, March, and May 2011. The show aired on Adult Swim starting June 2011.

Check out the character page if you have time as well.

Warning!! The examples below may include spoilers for the light novels, as well as the anime. If you're only following the latter, proceed at your own risk!

Tropes used in Durarara!! include:

It doesn't help that he keeps threatening to make sushi out of troublemakers.