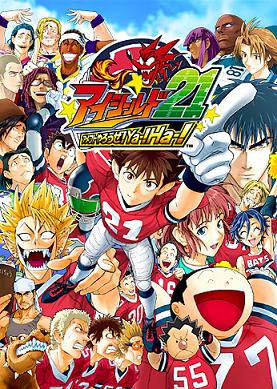 We will kill them!

Sena Kobayakawa was a short, scrawny first year student at Deimon High School. He had always been the target for bullies, from which his childhood friend Anezaki Mamori would always try to protect him when she was around. One day, a group of bullies cornered him and dragged him off to the tiny club room for the school's American Football team, where he was rescued by the team's only starting lineman, and recruited to be the team secretary.

In short order, Sena was discovered to be a fast and agile runner, trained by a lifetime of running from (and running errands for) bullies. In addition to his team secretary duties, he was quickly recruited to be the team's starting running back by the team's captain: demonic Youichi Hiruma. To keep him from becoming a recruitment target for every other club in the school, he was given a secret identity: Eyeshield 21, the mysterious hero from Notre Dame, who always plays wearing a helmet with a dark green eyeshield.

Between its captain's extortion, swearing and Training from Hell, the ultra-rookie Deimon Devil Bats is forced to round up a dedicated team without blackmailing the other sports teams' players. The goal: the high school national championships, the Christmas Bowl.

Eyeshield 21 is a less known but very well recieved sports manga. Its defining trait is its unique and individually interesting characters (including those from other teams). Each have an instantly recognizable personality and appearance and their interactions make up a large bulk of the comedy in the manga (the rest is Hiruma). Similar to Slam Dunk, it explains the rules of the sport (American Football) as the story progresses, allowing even a beginner to follow along with the games.

Sentai Filmworks started releasing the series in North America, sub-only, in May 2010. Though with the quality of the anime, most would say it would be wise to stay clear from it.

The manga has now ended, after 333 chapters.

Tropes used in Eyeshield 21 include:
Retrieved from "https://allthetropes.org/w/index.php?title=Eyeshield_21&oldid=1727596"
Categories:
Cookies help us deliver our services. By using our services, you agree to our use of cookies.