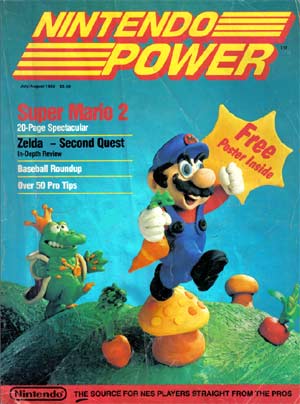 Starting in 1988, one of the longest-running video game magazines there is, Nintendo Power is a magazine that focuses solely on games for Nintendo consoles. Starting as a replacement for the Nintendo Fun Club News, the magazine initially contained game strategies for most of its run until its reboot during the late Game Cube era. It also contains news, previews, reviews, fan letters, and "community" sections related to Nintendo games. Originally published by Nintendo of America themselves, it is now currently published by Future US and edited by Chris Slate, and remains one of the most popular in North America.

The magazine is also known for its semi-regular comics and manga advertising new games. These include:

If you've been out of the loop for a while, by all means subscribe to Nintendo Fun Clu-oops, I mean Nintendo Power, or if you want to see the magazine's roots or re-experience your childhood, allow James Rolfe to inject you with a needle of nostalgia.

Tropes used in Nintendo Power include:

The comics that ran in the magazine contained examples of

Retrieved from "https://allthetropes.org/w/index.php?title=Nintendo_Power&oldid=1639739"
Categories:
Cookies help us deliver our services. By using our services, you agree to our use of cookies.