Everything About Fiction You Never Wanted to Know.
Jump to navigation Jump to search
/wiki/Ozzy Osbournecreator 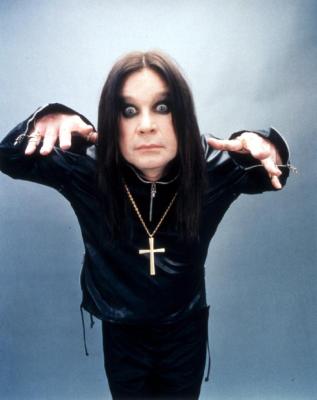 Can you help me occupy my brain?

Born John Michael Osbourne on December 3, 1948 in Aston, Birmingham. Also known as Ozzy. Or the "Prince of Darkness", if you want. As one of, or possibly the, first Heavy Metal singer, he has been called the "Godfather of Heavy Metal" while he prefers to call himself "The Prince of Darkness."

He's known in many circles as the original voice of Black Sabbath, the band who (arguably) created the Heavy Metal genre as we know it today. You can go to that page to know the rest of the details in his time with the band.

After his firing from the band, he started his own solo project and recorded his most critically acclaimed album, "Blizzard Of Ozz". The rest is history.

If you want to read about The Osbournes, pick this way. To all the tropers: PLEASE, put the tropes referring to the show there, not here.

"I can't fucking hear you!"
"Go fucking crazy for me!"

Years spent in torment
Buried in a nameless grave
Now he has risen
Miracles would have to save
Those that the beast is looking for
Listen in awe and you'll hear him...
Bark at the moon