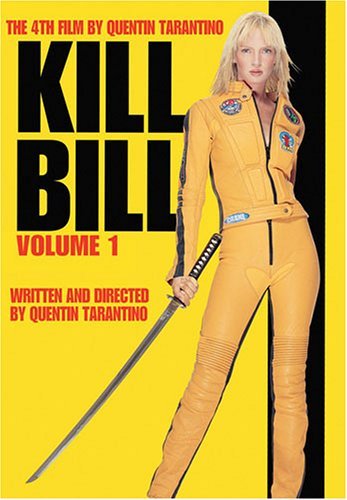 Kill Bill takes Quentin Tarantino's favorite things -- westerns, samurai movies, martial arts, pop-culture references, Action Girls, and close-ups of women's bare feet (don't ask about that last one) -- and combines them all into one hell of a revenge drama.

While Tarantino originally conceived the film as one complete movie, Miramax split it into two parts (Vol. 1, released in 2003, and Vol. 2, released in 2004). Watching them together earns you a nice four-hour action romp filled with deliberate over-the-top violence which runs on the Rule of Cool. Tarantino plans to film a third movie, but currently the project (originally intended to go before cameras in 2014) is in Development Hell.

The story -- told in "chapters", as well as Tarantino's signature non-linear fashion -- centers around an Action Girl known primarily as "The Bride", a former assassin who wants to pursue a life of normalcy. Her former crew, The Deadly Viper Assassination Squad, isn't too happy with that -- and during The Bride's wedding rehearsal, they crash the church and slaughter the entire wedding party, then beat The Bride spaghetti-western-style until she can't move. Once the DeVAS are done, their leader (the eponymous Bill) walks up to The Bride and puts a bullet in her head -- right after The Bride tells him she's pregnant with his child. Four years later, The Bride wakes up from a coma and vows to get her revenge on the DeVAS -- and anyone who happens to get in her way -- while saving Bill for last.

To view a partial list of the innumerable references to other films in Kill Bill, visit the List of Film References in Tarantino's Films.

Tropes used in Kill Bill include:
Retrieved from "https://allthetropes.org/w/index.php?title=Kill_Bill&oldid=1963297"
Categories:
Cookies help us deliver our services. By using our services, you agree to our use of cookies.