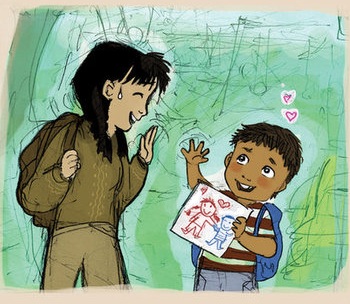 "Just thinkin' about someone special..."

Children having "crushes" on one another isn't uncommon. To most children, loving someone just means liking them a lot—they have no notions of romantic or sexual love, and are, for the most part, innocent. They may make a Childhood Marriage Promise with their best friend just because, and even pretend to get "married." Older kids generally have a basic idea of the birds and the bees, but still have to deal with raging hormones and lots of confusion.

But what happens when kids get crushes on adults?

In some cases, Squick happens. But in most instances, you have an ordinary kid who has to deal with ordinary awkwardness of having a crush on someone way out of their league.

The Precocious Crush is any instance of a child (usually pre-teen or younger, though young teenagers are sometimes susceptible) having a crush on an adult. Teachers are common targets, as are other, non-related caretakers. While having this kind of crush is more often associated with girls, it is increasingly common to portray boys as having this kind of crush. Usually, nothing ever comes of it—at least not until the character in question is much older, and even then, it still might seem a bit Squicky to some. In animation, the trope can be invoked without fully using it in the case of teenagers, where one character is only a few years younger than their crush, but differing rates of physical development makes the crush look a lot older than them.

Although it may seem to have Unfortunate Implications, this trope is actually Truth in Television. Lots of kids get crushes on teachers, after all. See also Puppy Love, where two little kids crush on each other. Should anything actually happen in the relationship, see Wife Husbandry, Jail Bait Wait, Hot for Student, and May-December Romance. See also Likes Older Women.

Examples of Precocious Crush include: