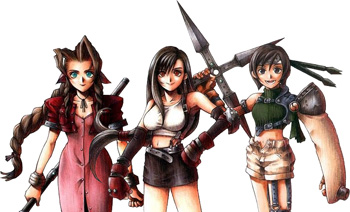 The middle girl is the brawler. Her breasts say so.

The tendency for the strongest physical female fighter in a group or cast to also have the largest breasts. Some of the reasons for this trope are discussed on the Analysis page.

A physically strong female without Boobs of Steel is most likely a Cute Bruiser. Compare and contrast with Most Common Superpower and Gag Boobs. See also Amazonian Beauty.

Note that this trope is not common enough to be averted. Unless it is lampshaded, it's just an ignored trope. Also note that in general, this is limited to one or two examples per work.

Examples of Boobs of Steel include:

Retrieved from "https://allthetropes.org/w/index.php?title=Boobs_of_Steel&oldid=1933815"
Categories:
Cookies help us deliver our services. By using our services, you agree to our use of cookies.