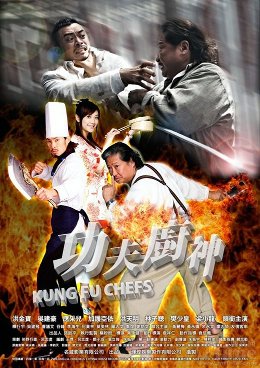 A Lethal Chef is someone whose cooking is so terrible that it could fall under the Geneva Convention as an inhumane weapon. A Supreme Chef is a superb cook, particularly the kind that participate in televised Cooking Duels where "every battle, reputations are put on the line."

Combine the lethal potential with sublime cooking skills and you get the Chef of Iron: a fighting cook, someone who can kick your ass and prepare a gourmet meal with equal ease. He/she is a bad person to have as an enemy but a good person to have invite you over to dinner.

Chefs of Iron fall into different, frequently overlapping types, not limited to:

May overlap with Evil Chef as a villainous version. Compare Battle Butler.

Not to be confused with a certain culinary contest, in case you didn't bother checking out that pothole above.

Examples of Chef of Iron include:

Retrieved from "https://allthetropes.org/w/index.php?title=Chef_of_Iron&oldid=1870693"
Categories:
Cookies help us deliver our services. By using our services, you agree to our use of cookies.