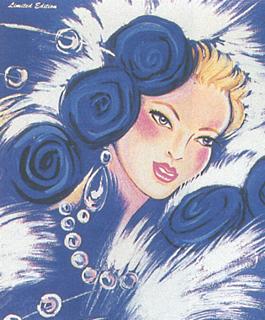 Another princess? Bor-ing! A "Winter" princess? Seems a little exotic.

Any time a noble or royal lady has a title that is winter themed.

Say you're a queen or a princess, and you find that the Ermine Cape Effect isn't giving you enough of an aura of majesty. You want to seem mysterious, exotic, perhaps even a bit dangerous.

Well, unless you live near the equator, the solution is simple. Choose a word closely related to winter. "Snow" and "Ice" are the most common, but others will do, as long as it evokes the feeling of the cold north. Then make one of your titles "The (winter word) Queen" or "The (winter word) Princess". It doesn't matter what your actual rank or title is. Just use that format.

Then make sure your wardrobe consists of mostly shades of blue, silver, purple, and especially white (but not pink, even if Princesses Prefer Pink). A Pimped-Out Dress and Pimped-Out Cape are obvious choices, but you could also have a "Happy Holidays" Dress, a Sexy Santa Dress, or even a Fur Bikini. Fur trim (white or gray), sapphires, diamonds, and/or silver on your dresses also adds a wintry touch. An Ice Palace wouldn't hurt.

Now watch how everyone speaks of you, with this title. You're now even more incredible in their eyes. You're like some kind of spirit or goddess to them, even if this won't actually give an indication of your personality. You can be good, evil or anything in between. You also could either have super powers (especially using Silver Has Mystic Powers) or just be a Muggle. They won't really know, and that's just the way you want it.

This is also why in holiday festivals and pageants, the winner is usually given this kind of title rather than one that is related to Christmas or any other holiday. These titles are much cooler (pun intended).

Note that kings and princes can do this, but it's rare. And mere nobility doing this is rarer still.

Despite the name, Defrosting Ice Queen isn't related to this, as that's about personality, and this is about titles. Although it often applies to sympathetic Winter Ladies.

Examples of Winter Royal Lady include:

Retrieved from "https://allthetropes.org/w/index.php?title=Winter_Royal_Lady&oldid=1289114"
Categories:
Cookies help us deliver our services. By using our services, you agree to our use of cookies.