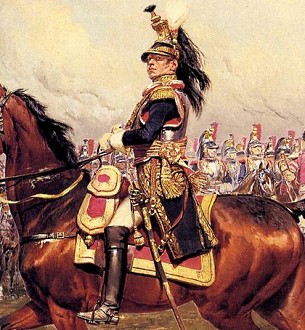 The enemy will cower before General Ange d'Hautpoul's gold brocade!

You've just entered your country's military force. And everyone seems to have great dress uniforms. Really fancy, with actual silk and gold.

What? Those are combat uniforms?

Yes, some fiction has characters wearing combat uniforms that are more appropriate for dress uniforms.

Okay, history does make this Truth in Television, like the Prussian military uniforms (and God help us all the WWI Minor Powers), but in combat it still counts as an Impractically Fancy Outfit. But they look nice, so artists love to use them whenever they can, especially in Anime, Manga, and Video Games. The design of the clothes determines if it falls into Impractically Fancy Outfit or Impossibly Cool Clothes.

In literary genres, where we do not actually get to look at them, these are generally the mark of aristocrats, the Miles Gloriosus, the Armchair Military, and the Glory Hound. On the other hand, the serious soldiers are more practical and drably dressed, and certainly regard looking splendid as a much lower priority. Only their dress uniforms embody the trope—if then.

Their personal weapons may or may not involve Bling Bling Bang. The hat is often a Commissar Cap. Officers and senior enlisted may carry some stick or baton indicating their rank, and expect their chests to be covered in various jangling medals. Futuristic settings can even have Powered Armor in this style.

This can overlap with Impossibly Tacky Clothes, when the work is making a Take That to this trope.

Examples of Bling of War include:

Retrieved from "https://allthetropes.org/w/index.php?title=Bling_of_War&oldid=1798734"
Categories:
Cookies help us deliver our services. By using our services, you agree to our use of cookies.