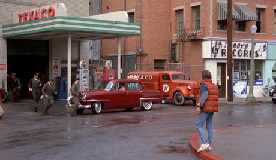 "Let's take a look back at the year 1928. A year when you might have seen Al Capone dancing the Charleston on top of a flagpole."

A scene in a period film or TV show that hits the viewer with as many period signifiers as possible. The scene exists to quickly establish the "feel" of the time period and will almost always feature a period song (typically one that is still popular in the present) playing on the film's soundtrack. More-or-less it's Popular History condensed into a sequence usually less than two minutes long.

A typical example appears in the second episode of Journeyman, where the lead character finds himself on an airplane in The Seventies. He sees, in the span of about thirty seconds, flirtatious stewardesses in orange uniforms, people smoking, a kid playing with a toy gun, the film Conquest of the Planet of the Apes being screened, and a newspaper that mentions the Ford administration, all while K.C. and the Sunshine Band's "Get Down Tonight" plays in the background.

Not surprisingly, this tends to instantly cause eyerolling in audience members old enough to have lived through the depicted time period and know from experience that it wasn't really like that. Gen-Y viewers are now getting a taste of this with 80's period flicks like Hot Tub Time Machine, as they vainly try to explain to disbelieving younger kids that no, everyone didn't wear red leather jackets and Flock of Seagulls-style hairdos back then. And then thirty years from now, those same kids will have to explain to their young how they didn't actually all have Bieberesque muffin-top dos and wear dresses made of meat when they see characters travel back to the 2010s.

The trope-namer is one of the best and most well-done examples, Back to The Future.

These are most commonly and generally best utilized by films and TV shows about Time Travel, especially when the characters frequently travel between different eras making quickly establishing the time period a necessity.

Examples of "Mister Sandman" Sequence include: