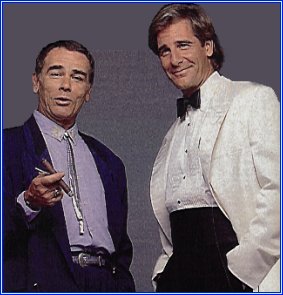 Quantum Leap is a 1988-1993 NBC Cult Classic series about a scientist, played by Scott Bakula, caught in a malfunctioning Time Travel experiment that bounced him back and forth in the past; the only way for him to move on from any time period he landed in was to change the life or lives of someone there for the better.

The show's explanation for the time travel was basically a Hand Wave -- the accelerator started Sam's leaps, but afterwards they were controlled by the Powers That Be. The show also established that leaping affected Sam's memory -- and his own past. This allowed the writers to regularly Retcon his skills and personal history (referred to in show as "the Swiss Cheese Effect") -- at least once a season he would suddenly be revealed to have completely forgotten about his musical career/doctorate in the specialty needed for the leap/wife/etc. (In other words, he Suddenly Always Knew That.) In the case of his wife, he hadn't so much forgotten about her as not actually had one when he started leaping; his pre-Leap marriage was actually a consequence of one of the changes he made -- as was the existence of his daughter Sammy Jo.

Great premise because it allowed an entirely new supporting cast and premise every week. If you didn't like one episode, chances are the next would be completely different. Also a cheap premise, since it made extensive use of existing period wardrobes, locations and sets, all but eliminating the need to build or make anything for the show, save for the very rare view of Project Quantum Leap itself. Many of the episodes recognizably played off the premises of popular movies, but went in a different direction.

The show employed several unique tropes. For one, though Sam would leap into a variety of different hosts, and he would appear to all other people (including Al, at first) as whoever his new host was, he would appear to the audience as Scott Bakula. Of course, Once Per Episode, he would look into a mirror early on to give the audience an idea of whom he was portraying. The actor mirroring what he was doing would usually not be any good at it, much like when David Duchovny and Michael McKean did the Duck Soup dance on that episode of The X-Files.

Though it had a sci-fi premise, Quantum Leap never really considered itself a sci-fi show. The time travel element was just a device to tell a variety of different stories, and the majority of episodes contained no fantastic elements at all, save for Sam's leaping and Al and Ziggy's guidance (one of the few shows to air on both the USA and Sci Fi channels at the same time). This was helped along by a rule (broken only twice intentionally, and twice by accident) that Sam could only time travel "within his own lifetime", so he couldn't be sent to prehistoric times or the future. This also helped keep costs down.

In 2002, what was then the Sci Fi Channel announced it was developing a two-hour TV Movie based on Quantum Leap, which would have served as a pilot for a new series; nothing seemed to come of it. But two years later award-winning writer/producer Trey Callaway developed a screenplay titled Quantum Leap: A Bold Leap Forward for the Sci Fi Channel. Another Pilot Movie, it was designed as a Spin-Off in which Sam's daughter from one of his leaps, Sammy Jo Fuller, was the leaper. This film, too, never came to be. In late summer 2010, Donald P. Bellisario announced that he was working on a feature-film adaptation of the series, but as of 2021, it never manifested

In 2021, Bellisario made a fifteen-minute video for Ars Technica in which he answered long-standing questions about the series and its possible future.

As of Spring 2022, a Pilot for a Sequel Series has been commissioned by NBC. Set thirty years later, it revolves around a new team that restarts the project in the hopes of understanding the QL technology -- and perhaps find Sam.

Quantum Leap is the Trope Namer for:
Tropes used in Quantum Leap include:
Retrieved from "https://allthetropes.org/w/index.php?title=Quantum_Leap&oldid=1960367"
Categories:
Cookies help us deliver our services. By using our services, you agree to our use of cookies.