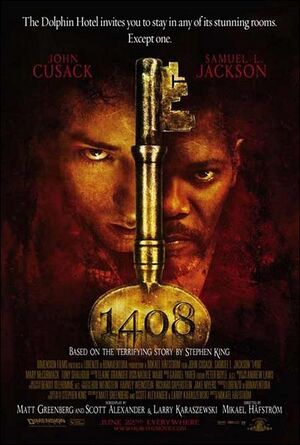 1408 (2007) is a movie starring John Cusack and Samuel L. Jackson, based on a Stephen King short story by the same name.

Cusack plays horror writer Mike Enslin, who specializes in investigating supposedly haunted houses and other sites of supernatural activity, which he has documented previously in books like Ten Haunted Graveyards and Ten Haunted Mansions. However, these investigations have yet to bear fruit in the form of confirmable sightings, leaving him pessimistic and jaded. Through an anonymous recommendation, Enslin learns about the Dolphin Hotel, in which no one has been able to stay even a single night (or even one hour) in one particular room - the eponymous 1408. According to his research, everyone who tries has committed suicide or died from anything from heart attacks to drowning. The manager, Gerald Olin, tries to warn him away from staying in that room, to no avail; Enslin is unconvinced by his warnings and tales, preferring to see things for himself. After all, what's the worst that could happen?

This arguably makes the movie even harder to watch. You desperately want something to hate for everything that's happening to Enslin, but hating a room is like, well, shouting at a minifridge. The good thing about this is that you're relieved that it's just this one room....

And then the theatrical release has his wife overhearing their daughter's voice on the tape at the end of the movie, begging to be allowed to stay with her parents, before the room reclaims her. Remember this was the ending the studio forced so it wouldn't be such a Downer Ending.