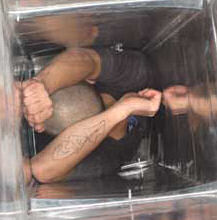 Why this trope doesn't work in Real Life.

It's the only move on the part of a villain that's stupider than Locking MacGyver in the Store Cupboard (or any room with a bed). When heroes find themselves trapped in a room with all doors and windows locked, the quickest exit is always through the ventilation duct. Air vents also work excellently in reverse for breaking in and infiltrating a facility, as well. Covers require little or no effort to remove, openings are always within reach, they're always able to support the weight of a person even though they were only designed to carry air, they are wide enough in diameter to allow an adult to pass through, there are no internal obstacles like bracing or blowers (except for the occasional menacing giant fan blocking the branching corridors), they are free of normal sheet metal's dangerously sharp edges, they are totally soundproof, and there's never a lack of light or chance of getting lost unless the plot calls for it.

And the escapee always emerges without having picked up so much as a speck of dust.

You'd think the bad guys would eventually learn to design thinner air ducts, or post guards around the openings instead of at regular doors, or line their ducts with barbed wire and broken glass. It even appears near the top of the Evil Overlord List. At least some are smart enough to equip their prison with a surveillance camera, which the hero simply has to smash before making the getaway.

This is practically a Discredited Trope by now, and requires some effort to justify if it's to be used seriously. Which is why it's such a shock that it's actually happened at least once in real life. Frank Morris and his accomplices escaped from Alcatraz by breaking out the grills in their cells and climbing through a maintenance corridor, up to the large ventilation duct that led them to the roof. This escape was later reproduced by MythBusters. However, on another occasion, Mythbusters did test more standard metal ducts, such as one would find in most buildings, and found climbing around in them impractical at best, along with being very noisy and certain to attract attention (even more so if you've got magnets attached to your hands and knees...). Perhaps the only way this trope is justified is if the character in question has some kind of shrinking or Super Smoke power, in which the physical limitations of an air duct are less of a concern.

One area where the trope isn't discredited is the world of Video Games: Expect almost any game set inside a complex to contain an ample supply of vents, many of which mysteriously just connect two rooms with no fans, grates, branches, or actual ventilation.

Some large universities (MIT and Caltech in particular) have longstanding "steam tunnel spelunkers" clubs, who often use air ducts (among other things) for exploring, getting around campus quickly, or pulling off pranks. Readers of this trope should be advised that this is extremely dangerous, not to mention illegal—steam tunnels are usually hot, cramped, and frequently criss-crossed by scalding-hot piping, and explorers face trespassing charges and possible academic sanctions if they're discovered within.

However, most attempts to sneak in or out via air duct aren't very successful since people tend to be fairly large and ducts tend to be fairly small, plus the fact that air can bend at ninety degree angles and fit through grates much more readily. There have been numerous cases where enterprising criminals have attempted to rob a store by sneaking through the ducts end up getting stuck. The usual ending is the embarrassed criminal being either pulled or cut out of the duct by the fire department and then promptly handed over to the authorities.

Compare Absurdly Spacious Sewer for a similar trope which takes place beneath buildings rather than in them.

Examples of Air Vent Passageway include:

Retrieved from "https://allthetropes.org/w/index.php?title=Air_Vent_Passageway&oldid=1878719"
Categories:
Cookies help us deliver our services. By using our services, you agree to our use of cookies.