A Taste of the Lash 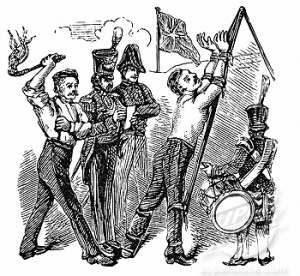 Flagellation (more commonly called "flogging") is a method of punishment in which a person is beaten or whipped with a rod, a switch, or (most especially) a whip or a cat-o-nine-tails. Flogging was commonly used in various navies around the world during the time of Wooden Ships and Iron Men, especially as the sailors of the time were known to have a disregard for pain. A knotted piece of rope (called a "starter") was used to give "encouragement" to a lazy sailor, while the cat-o-nine-tails was used for harsher, more formal punishments. It was also commonly used by slave owners as a method of disciplining their slaves. Typically during a flogging, the prisoner is stripped naked (or at least stripped to the waist) and then hung upright or chained upright to a pillar or a post (or a pair of posts) in order to stretch them out.

In addition to its use as a punishment, flogging (especially self-flagellation) has been used by religious fanatics as a means of "mortification of the flesh". The person would basically torture themselves in order to feel what Christ felt, and to suffer an immediate and rather determined form of self-sacrifice. This is based in the belief that by enduring the pain felt by Jesus during his persecution by the Romans, they become closer to the Son of God.

Lastly, some people use flogging as a means of sexual gratification. Naturally, in such uses, the flogging never approaches the violence levels reached during a punitive whipping. Such activity commonly causes bruising, but almost never breaks the skin or cuts the recipient, who is after all trying to enjoy himself or herself.

Flogging is still a legal punishment used in Brunei, Malaysia, Singapore, Tanzania, and Zimbabwe to this day.

Note that people can and have been flogged to death. A hundred lashes can easily kill, especially with a knot. Even if you don't die in the process, a good traditional flogging will often result in you dying from your wounds and/or infection shortly after. This is the sort of flogging that was a popular form of punishment in Imperial Russia, in particular, where they used particularly coarse leather for these purposes. Due to this it was also traditional to pay the executioner to go easy on someone, which still hurt like hell but generally wasn't fatal. It should also be noted that even if a victim survived a severe flogging, they could end up crippled for life, and in an era of single-income-earner families and little in the way of accessible charity on a large scale, this could leave the victim's family destitute.

Compare Don't Make Me Take My Belt Off. Contrast with Whip It Good. A form of Corporal Punishment.

Examples of A Taste of the Lash include:

Retrieved from "https://allthetropes.org/w/index.php?title=A_Taste_of_the_Lash&oldid=1686578"
Categories:
Cookies help us deliver our services. By using our services, you agree to our use of cookies.