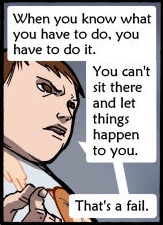 Erfworld was a Web Comic written by Rob Balder (of Partially Clips, and The FuMP), with the first book The Battle for Gobwin Knob illustrated by Jamie Noguchi (of Angry Zen Master and Yellow Peril), and the second book, Love is a Battlefield, illustrated by Xin Ye. The third book, Hamsterdance vs. the Charlie Foxtrot is in progress, is even longer. It was illustrated for the first half or so by David Hahn, but Xin Ye resumed art duties this time joined by Lauri Ahonen on inks and colors.

A fanatical, obsessed gamer geek gets magically summoned to another world to be the "Perfect Warlord" for a city that's losing a war, in a world that seems to be one giant Turn-Based Strategy wargame. (For instance, nobody can move beyond the immediate vicinity when it's not their side's turn.) Plays with many different strategy game tropes. Includes cutesy, Super-Deformed art and dark characterization, landing DEEP in the territory of Grotesque Cute. Many features of Erfworld are references to real-world popular culture and Internet memes.

Before Erfworld had its own site, it was hosted on the Giant in the Playground website, but it is otherwise unassociated with Rich Burlew (of The Order of the Stick).

As of October 11, 2019, "Erfworld is permanently discontinued as a webcomic."

Now has a Character Sheet in need of a lot of work.

Tropes used in Erfworld include:
Retrieved from "https://allthetropes.org/w/index.php?title=Erfworld&oldid=1815581"
Categories:
Cookies help us deliver our services. By using our services, you agree to our use of cookies.