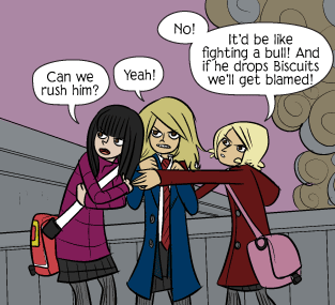 It followed a group of secondary-school (for Americans: middle school) kids; The girls consisted of plucky ringleader-sleuth Shauna Wickle, the endearingly simple Charlotte "Lottie" Grote, and wild child Mildred Haversham. The boys were Adorably Precocious Child investigator Jack Finch, justice-obsessed Linton Baxter, and the sensitive Sonny Craven. They all attended Griswalds Grammar School and got into all manner of capers and hijinks typical of living in Tackleford.

Initially centering on the group of children detectives as a whole, the stories began focusing on and developing one or two main characters for a particular plotline's duration. Supernatural elements were toned down slightly from Scary Go Round, though it retained John Allison's signature bantering character interaction and unique way with words, though he one said that the language is more complex than SGR‍'‍s, partly because of the younger cast and partly because he'd grown out of it.

Bad Machinery began on September 21, 2009 and concluded on April 6, 2017. Sadly, Allison has purged it from his website at scarygoround.com, and it can now only be found on the Wayback Machine here. The first installment of the web comic can be read here.

Tropes used in Bad Machinery include:

A Closed Circle murder mystery featuring Lottie from Bad Machinery and Shelley from Scary Go Round. Shelley, now a children's author, is invited to a party in her agent's remote Welsh mansion, and brings along Lottie as her intern. When one of the author is murdered and several of the guests have motives, our heroines investigate.

Retrieved from "https://allthetropes.org/w/index.php?title=Bad_Machinery&oldid=1933067"
Categories:
Cookies help us deliver our services. By using our services, you agree to our use of cookies.