Put on a Bus to Hell 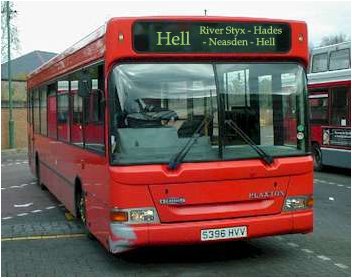 No, not Neasden! Anywhere but that!

So an actor's walked out of the show, leaving you and the other writers in a bit of a sticky spot. You don't want to kill their character off, but you're still feeling pretty malicious, and just having them Put on a Bus isn't nasty enough. The solution is to Put Them On A Bus To Hell - write them out in a way so mean-spirited that it's clear to all and sundry that you're doing it out of spite.

The most common form is for them to suffer rapid Character Derailment, often over the course of a single episode. Maybe they're too busy holding onto the Idiot Ball to prevent a beloved character getting hurt, or perhaps they even did something irredeemably awful themselves. Whatever the circumstances, by the end of the episode, they have no choice but to leave town forever to preserve what tattered shreds of dignity they have left and save their friends from the worthless wreck of a human they've become.

This trope is for specifically non-fatal examples. If a character dies under these circumstances, then he has been McLeaned.

Compare Dropped a Bridge on Him. Contrast Bus Crash.

Examples of Put on a Bus to Hell include:

Theodore Long: "[...] Over the memorial day weekend The Undertaker was found by his brother Kane in a vegetative state!"