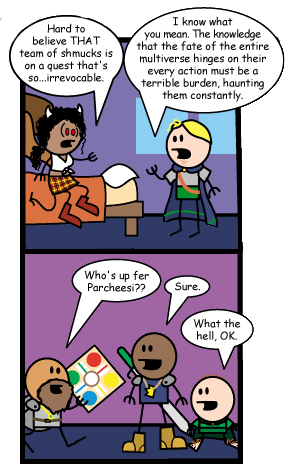 "We have no time for sorrows, Commander."

How would you feel if you were Trapped in Another World, and could never see your family again? And then it turned out you were The Chosen One and the world depended on you? And you team up with a band of quirky companions, and one by one, they all get killed by the Evil Minions? Except one, who turns out to be The Mole and gets you captured? How would it make you feel?

If you're a fictional character, the answer is probably "feel sad for five minutes, then forget about it." Angst? What angst?

The polar opposite of Wangst, this is when a character has every right to be depressed or Ax Crazy, but isn't, and life goes on. They aren't The Stoic or the Determinator—they aren't supposed to be so strong-willed. And they are not expressing Don't You Dare Pity Me!. The number one example is children's adventure stories, where the young heroes rarely Freak-Out about having to pilot a burning biplane into a T-Rex's mouth. They either don't react much, or they think it's a cool adventure and they wish it would never end. Most real children would react much worse. But it isn't fun for those real children to read about people like themselves screaming in terror as their lives fall apart, so the fictional children don't; the Plot Armor probably helps. Besides, There Are No Therapists to talk to anyway.

But it doesn't have to be an adventure story; any genre with horrible suffering will do it (except the ones that thrive on the characters angsting, like soap operas). Angst? What Angst? can lead to huge Fridge Logic moments, especially when the character who has survived killer bees and cancer throws a fit because somebody forgot their birthday.

In a variant, some stories rarely have the characters angst out loud, but make it clear that they're cracking on the inside and are just putting on a brave face. Other stories, using the Law of Disproportionate Response, have the characters deliberately overreact to small things and underreact to big things to show how unhinged they are.

This actually can be a bad trope, similar to Wangst. A character just shrugging off stuff that real people would shed tears at or have breakdowns over may be asking for a little too much Willing Suspension of Disbelief. It might give them the appearance of a sociopath when that couldn't even be the point of the character. Of course, similar to Wangst, this Trope can be used for laughs as well.

Possibly Truth in Television for the more extreme cases. If you're fighting for your life, you don't have time to think about how awful it is. Except for the times when you crack and go shellshocked, maybe.

Examples of Angst? What Angst? include:

Retrieved from "https://allthetropes.org/w/index.php?title=Angst%3F_What_Angst%3F&oldid=1834684"
Categories:
Cookies help us deliver our services. By using our services, you agree to our use of cookies.