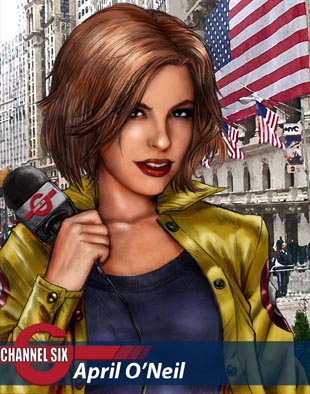 Perhaps it's their ability to uncover the truth about evil goings-on. Perhaps it's their brilliant research skills. More likely, it's a desire to do an exposé on them, finding out just what is under that lovely blouse.

Journalists who are attractive, basically.

A popular character in action movies and cop shows, as it's a good way to introduce a love interest who has a plausible reason for following the hero into danger. Sometimes overlaps with Action Girl, though it predates the latter trope's popularity by a good many decades, as it was more acceptable for a woman to be a nosy Boswell than a butt-kicking Battle Babe.

Common characteristics of attractive female journalists are an abundance of "moxie", with "gams-a-plenty" or "legs from here to Kalamazoo".

Can overlap with School Newspaper Newshound if it's set in a school. See also Intrepid Reporter and Going for the Big Scoop... which is not about dating the reporter, but their tendency to seek out danger.

While generally good(ish), a minority of these characters turn out to be true villains. Generally this sort overlaps with The Vamp.

Examples of Hot Scoop include:

Retrieved from "https://allthetropes.org/w/index.php?title=Hot_Scoop&oldid=1818000"
Categories:
Cookies help us deliver our services. By using our services, you agree to our use of cookies.