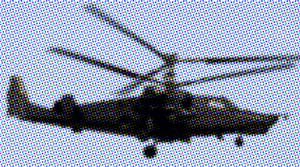 You see them too, right?


They said it was a weather balloon
—Soul Coughing

The aliens are closing in, the terrorists are priming the warhead, the President's hijacked motorcade is arriving, or perhaps the loveable band of hackers is about to uncover the Government Conspiracy. Whatever the situation, The Men in Black need to arrive in style, and there is only one way to do that: the Black Helicopter.

Half Cool Plane, half Silent Runner, the Black Helicopter is to secret agents what the Batmobile is to Batman. Fast, quiet, stealthy, powerful, almost invisible and, of course, pitch-black, nothing screams cover-up quite like a black helicopter. Black Vans with radar dishes provide ground support, but aren't nearly as cool.

A somewhat dubious Truth in Television, as Black Helicopters are an ingredient of many real-life conspiracy theories. Possibly influenced by dark painted helicopters that get mistaken for black in poor lighting conditions while performing disappointingly mundane operations.

In Real Life if a helicopter was involved in sinister operations it would probably not be painted black—to avoid the trope and avoid sticking out like a sore thumb.

Examples of Black Helicopter include:

Crow: It's one of those UN black helicopters, except...white and orange.
Mike: Exactly what they would do!

CIA guy: It helps when you have props.

"Open up your third eye, Black Helicopters in the sky"

Manderly: If black helicopters were really being used for 'covert operations,' then those responsible are doing a poor job of it.

A player can actually tell apart the Marine and Blackwatch vehicles (the latter of which are actually slightly tougher) from each other. Marine vehicles are have a typically military tan-color, while Blackwatches stuff is... well black. So not only are there Black Helicopters, but also Black Tanks as well.

Tip: We've got a black helicopter! You know what that makes us? An officially intimidating secret organization!

Ron: So, what are the chances that they're not after us?
Kim: They're black helicopters, Ron. They're always after us.

Rancher: What the hell was that?
Officer Barbrady: That...that was just a pigeon.

Dale Gribble: Must be one of those new silent UN black helicopters, as you can hear they're still working out the bugs.