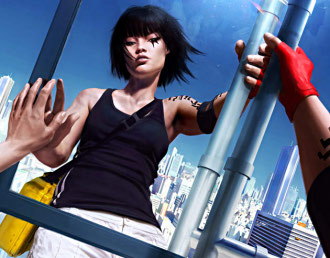 Mirror's Edge is a first-person action video game, set in a big, shiny city in a conformist police-state. You are cast as Faith, an illegal courier or "runner", whose job it is to hand-deliver messages and data across rooftops and skyways to avoid ubiquitous government monitoring of movement and communications.

The story follows Faith in her struggle to free her unjustly-imprisoned sister. While running her clients' illegal messages, she gets caught up in a series of events which lead to her being ruthlessly pursued by the totalitarian government herself. Mercury, Faith's trainer and mentor, acts as her guide, helping her outwit, outrun, and overcome the sinister agents out to eliminate her.

An iPhone/iPad remake was released in 2010. The gameplay was changed to a 2D Canabalt-style platformer, and the plot involves Mayor Callaghan's attempt to turn the public against the police so she[1] can replace them with her private military, something that was only hinted at in the original game.

At E3 2011, the president of EA games confirmed that a sequel was at least in the concept development phase. Mirror's Edge Catalyst was officially announced at E3 2013 and was released in 2016.

Tropes used in Mirror's Edge include:
Retrieved from "https://allthetropes.org/w/index.php?title=Mirror%27s_Edge&oldid=1923053"
Categories:
Cookies help us deliver our services. By using our services, you agree to our use of cookies.