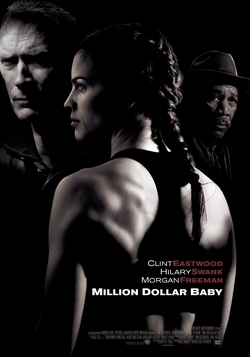 Margaret Fitzerald (Hilary Swank) is a down-and-out waitress striving for a better life. So she does what all down-and-out waitresses do to help themselves out - she learns how to box. The first portion of the movie deals with Margaret training herself at the Hit Pit trying to get Frankie Dunn (Clint Eastwood) to train her into becoming a credible boxer. She eventually succeeds and is able to get Frankie and another trainer and former boxer Eddie Dupris (Morgan Freeman) to warm up to her.

After a good deal of training she enters into the world of professional women's boxing and becomes a remarkable fighter. Eventually the movie takes a turn for the worse.

Better Than It Sounds. Noted for its strong characters and interesting storyline, the film won four Oscars, including Best Picture.

Tropes used in Million Dollar Baby include:
Retrieved from "https://allthetropes.org/w/index.php?title=Million_Dollar_Baby&oldid=1830528"
Categories:
Cookies help us deliver our services. By using our services, you agree to our use of cookies.